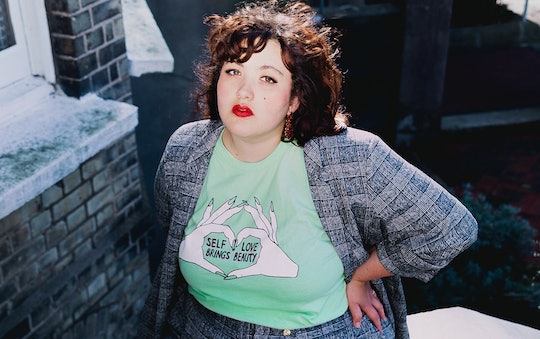 No one said it would be easy. I'd spent the third trimester of my pregnancy tired and pained, incapable of sleeping through a full night. Once my daughter arrived 11 months ago, I was recovering from what was a harrowing, gory ordeal, and any semblance of me-time I'd once known had vanished. It was a lot to go through. Yet looking back, there is something I didn't struggle with. Not really. My body changed in those last 12 weeks of pregnancy, and has continued to change since Luna's birth. There have been times when I looked down and failed to recognize the body in front of me, but the truth is I've never hated that postpartum body.

A once-smooth, albeit still plus-size, stomach is now covered in stretch marks. They remain red and bright nearly a year after labor. My breasts are marked by nursing and gravity. They sag and fall to the sides. My legs know more cellulite. My face knows exhaustion. I carry new weight all around me. Sure, I'm inundated with post-pregnancy workout and dieting advice. I know that, for a lot of people, weight loss becomes the utmost priority once that baby is out. I know that all of the new physical characteristics decorating my skin — the stretch marks, the "extra" pounds, the sag — are deemed "flaws" by most mainstream magazines and sometimes-well-meaning but no less misguided relatives alike. (Especially when they decorate already-fat figures like mine.)

Even so, I'm not struggling. And I have the body positivity and fat acceptance movements to thank for that.

I first stumbled upon the phrase "body positivity" during my senior year of college. In 2011, the term hadn't yet been popularized to the degree it has now. It was used primarily by bloggers, writers, and activists whose views aligned with those of the fat acceptance community. That is, people who believed that size discrimination is a tangible, damaging issue, and that fat bodies are worthy of tolerance. That fat people deserve to feel beautiful and well-treated and entitled to live as they so please without first losing weight. These were movements that de-stigmatized my entire existence. That made me feel like I deserved love, fashion, proper healthcare, proper respect.

In the years since, no aspect of my life has been untouched by the fat-positive community. As a writer and editor, I've been covering weight discrimination, plus size fashion, and problematic beauty standards since leaving university. It's become my work and, although it puts me at risk of additional trolling, doxing, and day-to-day bullying, I wouldn't have it any other way. I've also eliminated toxic friends who chastised me for the skin I occupy, choosing instead to surround myself with empowering individuals. Individuals who assume their right to take up space and applaud me for doing the same. I stopped hiding my body from lovers, passerby, or from myself. I started living for me. I started doing all the things I'd long been taught I wasn't "allowed" to do until I lost weight, and I did it all without sacrificing a pound.

Throughout all of this, I fell in love with myself. In eschewing the idea that self-love was only a luxury for narcissists or thin humans, I reached a point where I could look at my large body, at its craters, lumps, and bumps, and see only beauty and softness.

This is still true now — even if much of the world wouldn't want me to feel such a way. As a new parent, I now understand just how pervasive beauty standard rhetoric geared at mothers actually is. Moms aren't meant to simply appreciate the growth and changes their bodies go through once they have children. They're not supposed to be content to live in these new bodies — bodies that have undergone one of the most difficult experiences a body can go through. Bodies that have gifted them what is often one of the most beautiful gifts the universe has to give. Nah. We're supposed to "fix" those bodies. We're supposed to strive endlessly to achieve whatever figure we inhabited before it all went to sh*t. Before weight was gained, before stretch marks bloomed, before gravity struck.

I don't know that I could've survived the shock to the system that is becoming a new mother if I was also condemning myself for not looking like a conventional supermodel every step of the way.

Among all the reasons why becoming a new parent, and a new mother especially, is difficult, we have all of this BS to contend with. What should be a joyous occasion is darkened by the thought that we are failures for "letting ourselves go." The messaging suggests that we are not as beautiful, worthy of tolerance, or even as human as we once were. It's a lot. It's too much. It's way more than I would ever want to deal with.

I don't know that I could've survived the shock to the system that is becoming a new mother if I was also condemning myself for not looking like a conventional supermodel every step of the way. I don't know if I would've been able to enjoy all the fun bits — my daughter's first giggle, the first time she reached out, or rolled over — if I was simultaneously wishing I didn't take up as much room around her. I'm no stranger to body image issues. I knew them well for 20 years, and I know that they can ruin just about any experience.

My body brought me my best friend.

When I look at my post-pregnancy body, however, all I see is everything that this big, droopy figure has accomplished. It carried a whole other person inside it. It allowed that person to make their way into this weird, messed up, but occasionally amazing planet. It brought me my best friend. It's grown physically, almost as a metaphor for all the internal growing I've done. For the shifts in my personhood that have come from becoming someone's mom. And even before that, from beginning to grow up.

If it hadn't been for the body-positivity and fat-acceptance communities, I may not have ever found that strength: And it does take strength. It takes strength to be critical of sociocultural messaging, rather than default to being critical of oneself. It takes strength to believe that you are worthy of your humanity, and of care and love and beauty, when so many people and institutions insist that you aren't.

If it hadn't been for the empowering, uplifting voices fighting for bodies like mine, and for people like me, I don't know that I ever would've felt empowered myself. This has been the most tumultuous year of my life, but I'm proud that I've never taken the stress out on myself. I'm thankful for the people who've guided me to this point. I'm thankful to this big, fat body.