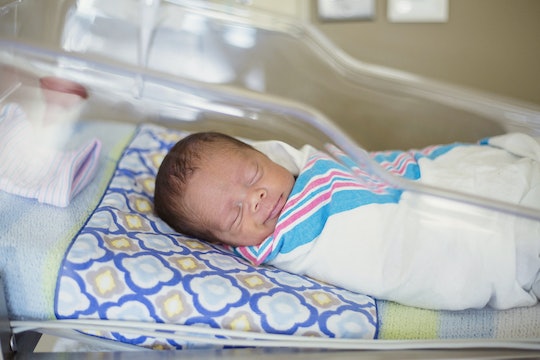 Bringing a new baby into the world is one of the momentous things anyone can do. It's emotional, and beautiful, and frightening, and difficult. And if your baby happens to come earlier than expected or is born with complications, it can be even more harrowing. The uncertainty about your baby's future coupled with the separation from the most important person in your world is enough to cause any parent distress. Fortunately, there's new technology to help a little. These cameras are helping parents with babies in the NICU stay connected, so they don't feel quite so lost and worried. And it's a beautiful thing.

Angel Eye cameras are internet-based camera systems that are placed on a baby's bedside and transmit 24-hour video for parents and family members to watch on their laptop, smartphone, or tablet. These cameras allow any family member who can't be at the NICU to log into a secure account and monitor the premature baby. This is intended to promote vitally important bonding opportunities for parents who can frequently be overwhelmed with the needs of a premature baby, particularly when the babies have to stay at the hospital for weeks or even months. Parents often have to go back to work or possibly care for other children and might feel disconnected or worried about their baby. Angel Eye cameras allow them to check in, even if they can't be on site.

The Angel Eye camera systems were initially launched commercially in 2013 and are now used in 80 hospitals across the United States. Dr. Curtis Lowery, one of the founders of the Angel Eye camera and a maternal-fetal medical specialist, explained to KATV News where the idea behind this helpful invention came from:

The babies are often very, very sick, and they have to stay here for a long time, sometimes six months, and the parents, mothers, have to go back home. So we came up with the idea that if we could put a camera on the bed, they could watch their child from home or bedroom or work.

Several parents of premature babies in the NICU at University of Arkansas for Medical Science (UAMS) where the Angel Eye cameras were invented told KATV News that just being able to see their child was a god send. Especially once they had to return to life at home with the rest of their family; not only are they able to watch their child on their devices, but older siblings and other family members get a chance to bond as well. As Rachel Swatty, who has one daughter, Jane, in the NICU and two other daughters at home, pointed out to the news outlet:

We would wake up in the morning and we'd all get in bed with our cell phone and we would watch Jane together.

Premature babies (babies born before 37 weeks gestation) require special care that can often last for weeks, months, or even years, depending on the severity of complications. Some of the difficulties with a premature baby include low birth weight, respiratory issues, problems with the heart, stomach, and brain, and a decreased immune system, according to the March of Dimes. In other words, parents have enough to be worried about without having the added stress of feeling disconnected from their baby.

The Angel Eye camera comes with extra features as well, like a chat function that allows real-time communication with NICU staff, 24/7 customer support, and even the option to view more than one baby in the case of multiples.

Anything to make the lives of families with babies in the NICU easier is a good thing.