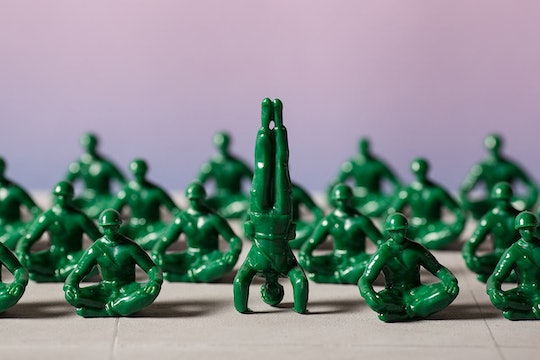 Left, left, left, right, left, and on the exhale, sink deeper into child's pose. Think these things don't go together? Think again. One man remixed a beloved old-school toy, and now, classic green army men doing yoga are a thing. Namaste to that.

The little green army men were inducted into the The National Toy Hall of Fame in 2014. Their website says these little soldiers started as metal and lead army men, but their manufacturer switched to their signature green plastic in the 1930s. They're replicas of mid-20th century, U.S. infantry soldiers. Some carry weapons while others hold radios or binoculars, but all stand between 2 and 4 inches tall. (Or is that 2 to 4 inches small?) And, of course, they always came in a big bundle or bag with their fellow soldiers, and maybe a jeep or piece of artillery.

Because plastic army men were so inexpensive compared to their metal ancestors, kids could lose them or beat them up without too much worry, and it was more affordable to amass an army. They allowed generations of boys and girls to play general in the sandbox. But today's little green army men have taken up a new hobby in their golden years.

Yoga Joes take the concept of little green army men and turn it upside down, figuratively and literally. Gone are the guns and rifles, helicopters and plastic barricades. These G.I.s are made of the classic green plastic, but depict those same infantry soldiers in downward dog, tree, and warrior poses instead. They can be used as toys, sure, but they're also a great piece of statement art.

Yoga Joes come in packs of nine for $25, and customers can choose from three varieties of poses and even a few different colors: classic green, hot pink, red, tan, blue, purple, and tantric tangerine. Oh, and the Rainbow Joes are pretty fantastic, too. Choose between Series 1 and Series 2 Yoga Joes depending on the poses you'd like them to strike. For more advanced gift-giving, opt for the Advanced Yoga Joes, featuring some of the practice's most challenging poses. Every set comes packaged as a yoga studio with bamboo flooring.

The creator of Yoga Joes, Dan Abramson, told Art-Sheep that he made these little guys "because I thought that it would be a fun way to get more people into yoga, especially dudes. Beyond that, I wanted to make a violent toy become peaceful." And you know what? He has a point.

The New York Times described the original intent of yoga as "spiritual development practices to train the body and mind... cultivate discernment, awareness, self-regulation and higher consciousness in the individual." As a form of exercise, yoga practice is all about relaxing the body and mind in order to release tension and increase flexibility. Is there anything that sounds more opposite to war and violence?

The next time you buy a gift for the yogi, nostalgic adult, or toy collector in your life, keep these little guys in mind. As the website says, these men are here to keep the inner peace.