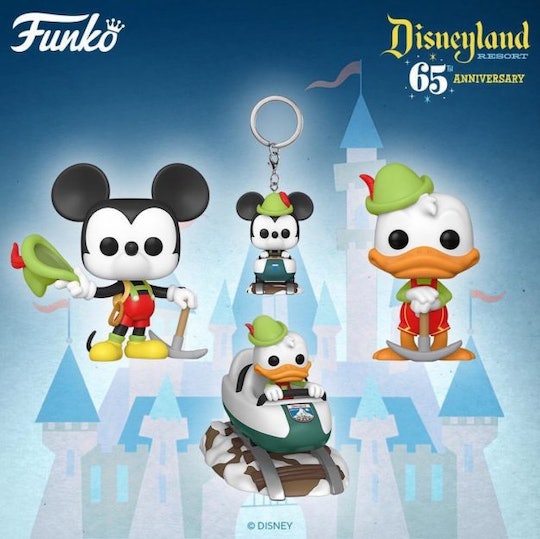 The spinning teacups, Dumbo, The Matterhorn. There are so many iconic attractions at Disneyland that become the backdrop of your own special memories once you've ridden them. And these adorable Disneyland ride Funko Pop figurines are meant to honor Disneyland's 65th anniversary, and they commemorate all the magical moments those rides have brought Disney lovers for decades.

It's hard to believe it's been 65 years since Walt Disney opened his Disneyland park with the words, “To all who come to this happy place, welcome!” Some people may remember that day, while others have never known a world without Disney movies, characters, and theme parks. And if you have some favorite rides you just have to get on each time you visit Disneyland, well, you're not the only one (judging by how many of these new Funko Pops are already sold out). Some figurines are available now while others are on preorder with varying release dates, so check out the details on each.

For starters, Target will have the exclusive on all of the Mad Tea Party — better known as the spinning teacups — and Alice in Wonderland figurines. The Mad Hatter himself has a Funko Pop riding on the Mad Tea Party, and the accompanying Alice and Cheshire Cat Funko Pops are pretty darn adorable, too. They’re currently available for preorder online via the Target website, and will be released October 4.

There are also collectible figures of Mickey Mouse, Minnie Mouse, Goofy, Donald Duck, Pluto and Dumbo riding in connectible cars of the Casey Jr. circus train. You can snag all six once more are back in stock on the Funko Pop website, except for Minnie. She and her Casey Jr. caboose car are an Amazon exclusive, so look for her there.

If the Matterhorn Bobsleds or Mr. Toad's Wild Ride have your heart, Funko Pop has you covered as well. Check out Mr. Toad in his very own wild ride, or purchase him as a standalone figure. As for Matterhorn memorabilia, check out the miniature Mickey keychain riding in a tiny bobsled, or a full-size Funko Pop of Donald doing the same (he'll be released October 15). Mickey and Donald also have more traditional Funko Pops in their Matterhorn costumes, pickaxes at the ready.

And who doesn't love the Dumbo the Flying Elephant ride at Disneyland? Pretty sure it's been in every promo video they've ever filmed, like, ever, because it's one of the most magical places in the park. This Funko Pop of Minnie Mouse waving from the Dumbo ride is the perfect gift for someone who will wait in the Dumbo line all day if they have to. Peter Pan and the attraction Peter Pan's Flight earned their own figurine too, which shows his pirate ship crashing through the water.

You can purchase many of these attraction Funko Pops as miniature keychains (ranging in price from $7.99 to $14.99), or as mini figures featuring other beloved characters. Whether you want them all for yourself or see the perfect gift for someone you love, these Disney Funko Pops are a great way to remember some of your most magical memories.