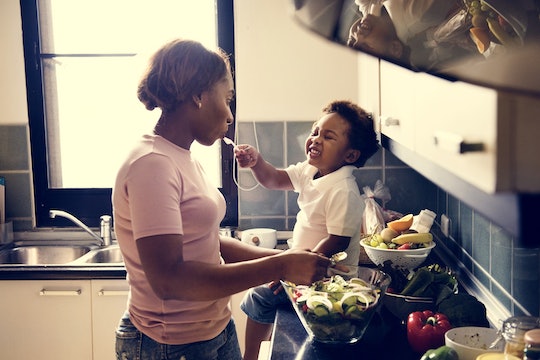 These Facts About Black Maternal Health Are Horrifying, & Entirely Preventable

It's well-known, through decades of research, that Black women face deep disparities in access to quality prenatal and perinatal care compared to White women. A mix of factors contribute to this racial divide in maternal health, and these facts about Black maternal health show the severe and deadly consequences of how those factors play out for women of color.

More Like This
Vaccinated People Can Ditch Masks. Where Does That Leave Kids?
Your Guide To Swimming Postpartum
10 Hilarious Tweets That Perfectly Capture What Moms Are Going Through
The FDA Has Authorized The Pfizer Vaccine For Kids As Young As 12

Many of those facts will be highlighted during the inaugural Black Maternal Health Week, a new nationwide awareness campaign started by the Black Mamas Matter Alliance. From higher maternal mortality rates to increased risks of serious conditions, Black women and mothers continue to face health disparities that are entirely preventable, but nonetheless persistent, mainly because of systemic racism that's pervasive in the health care system.

Elizabeth Dawes Day, chair of the Black Mamas Matter Alliance steering committee, told Mic that the goal of the week, which kicked off Wednesday and ends on April 17, is "to deepen the conversation around black maternal health and amplify black women leaders who are working on the issue."

Part of deepening that conversation is knowing how the racial gaps in maternal health present themselves. And here are just three ways Black mothers are disproportionately affected.

Each year, about 700 women in the United States die from pregnancy- or childbirth-related complications, according to the U.S. Centers for Disease Control and Prevention. And Black mothers represent a disproportionate slice of that statistic: CDC data shows that the risk of pregnancy-related deaths is three to four times higher for Black women than their white counterparts. What's more: A 2007 American Journal of Public Health study found that Black mothers are two to three times more likely to die from pregnancy or childbirth-related complications than white women with the same condition.

Dr. Aisha Wagner, a fellow with Physicians for Reproductive Health, said in an email statement to Romper:

The numbers give us just a glimpse of the unjustifiable disparities that exist: in the United States today, pregnancy-related deaths for Black women are three times more likely than for white women—one of the widest racial disparities across health care—and infant mortality for Black infants is twice as likely as for white infants.

Black Mothers Are More Likely To Suffer From Pregnancy Complications

Not only are Black mothers more likely to die during pregnancy and in childbirth, they're also more likely to suffer pregnancy-related conditions. A 2016 New York City Department of Health and Mental Hygiene analysis of the city's maternal mortality cases, for example, found that college-educated Black mothers experienced severe complications at higher rates than White women who lacked a high school diploma. What's important about this report in particular is that it disproves theories that external factors, such as education, carry more weight in disproportionate Black maternal health rates.

Black mothers are also disproportionately affected by other conditions that can affect their health during and after pregnancy. In addition to premature delivery, Black women face a higher risk of developing heart disease, diabetes, and mental health issues, according to SELF. Although these health issues can present themselves outside of pregnancy, they can either lead to or exasperate complications during pregnancy.

All of these facts prove why the country needs Black Maternal Health Week. To that end, Wagner said in her statement:

As a pregnant woman of color and a family medicine physician who has the privilege of caring for many Black mothers and pregnant patients, I know how vital it is to fight to advance maternal health, rights, and justice for communities of color, specifically for Black women.

We must do better. We must talk openly about racism in health care. We must center our care in a way that respects the right of Black women to thrive before, during, and after pregnancy.