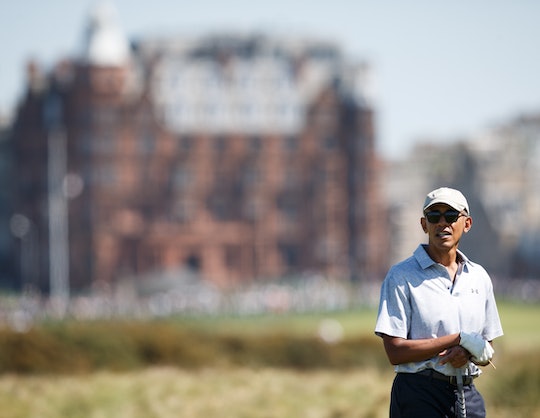 Right now, the United States is going through a tumultuous time. But cutting through that orange-tinted darkness is a bright ray of light. And that shining beam is known as former President Barack Obama, who, on Friday, celebrates his first birthday since leaving the Oval Office in January. Even though he's no longer president, Obama continues to make an impact on the country through his foundation and charitable work. Still, if you're anything like me, these "Happy Birthday Obama" tweets will make you long for the days that Barry O. roamed the White House halls.

According to Newsweek, Obama has decided to mark his 56th birthday by traveling to Martha's Vineyard with former first lady Michelle Obama and their daughters, Malia and Sasha. On Twitter, though, Obama's devotees have decided to dub Friday as "Obama Day," sharing their favorite memories and well wishes for the former leader, as reported by the Sacramento Bee. Michelle even took to the social media platform to honor her husband's birthday, posting two older photos of the Obama family along with a sweet caption that reads,

Another year older, but the same phenomenal guy I married nearly 25 years ago. Happy birthday, @BarackObama -- we love you so much!

Barack and Michelle have been jet-setting around the world over the last seven months — no doubt recuperating from 12 years of racism, obstruction, and general antagonism from the party that now controls the White House. They've visited Indonesia, Italy, and Obama's home state of Hawaii. The 44th president also went kitesurfing with billionaire Sir Richard Branson, which produced the best vacation photos that anyone could take, IMHO.

But, as Newsweek pointed out, Obama has also worked hard as a private citizen. He continues to speak out against injustices. He continues to galvanize the public to fight for human rights. The former president has also doing more work with the Obama Foundation, which he founded with Michelle three years ago. The nonprofit has taken a focus on digital citizenship and community organizing. Oh, and Obama also accepted the 2017 Centennial John F. Kennedy Profile in Courage award back in May for "his enduring commitment to democratic ideals and elevating the standard of political courage in a new century," according to a news release.

It's safe to say the 44th president of the United States has been a busy person. Hopefully, he's relaxing in Cape Cod, Massachusetts without a care in the world.