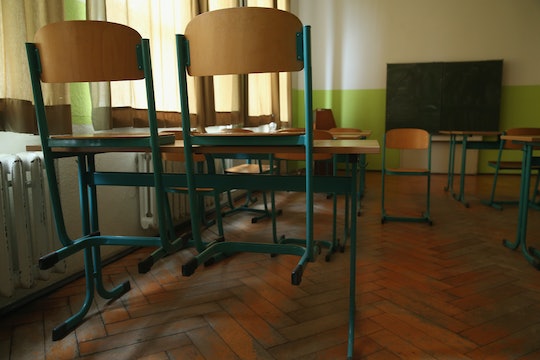 School dress codes, am I right? It never ceases to amaze me, the different expectations so many school administrators seem to have between what is appropriate for the way boys and girls dress. Not to mention how much responsibility girls' are expected to shoulder for the way their clothes might somehow "distract" boys from their work. It's ridiculous, and I'm certainly not the only one to notice. When one school prohibited girls from wearing off-the-shoulder tops, these high school boys protested the sexist dress code.

When students at San Benito High School in Hollister, California went back to school at the beginning of the week, some of the female student body were shocked to find themselves cited for dress code violations. Simply because they were wearing off-the-shoulder tops in the hot weather. These tops have always been off limits for students, according to a report by Yahoo, but school administrators weren't really enforcing the dress code violation before Monday. An unnamed 16-year-old female student at the school told Yahoo:

The dress code policy hasn’t been an issue the past two years I have been here, and it was okay and it would be the same with a lot of the other girls.

Suddenly, it seems, girls' shoulders appeared to be just too distracting for the school. Even though girls had been showing their shoulders for years, school officials allegedly cracked down on the dress code violation in an effort to ostensibly "keep kids safe."

The young men of San Benito High School were distracted by the dress code, but perhaps not in the way school officials might have expected. In a show of solidarity and wondrous maturity, several boys wore off-the-shoulder tops to school.

Students like Andrei Vladimirov, for one. The 17-year-old student told Huffington Post that he wanted to join two fellow male students in the protest because he believed the dress code was inherently sexist:

What I find problematic about this [keep kids safe] response is that if someone did try to assault a woman, the responsibility should lie solely on the attacker, not the victim. A woman never ‘asks’ to be objectified, assaulted or raped ― and such thinking is what creates harmful consequences. Women deserve to be treated with respect ― and to be treated with respect is to be given the freedom to express one’s self, and hold agency as an individual. The notion that women should clothe themselves because it is ‘distracting to men’ undermines both the agency and volition of women ― which has long been suppressed ― and the maturity of men, and reinforces the idea that all men are only concerned with sex.

If ever you despaired for the future of the species... remember there are young men like this. Men who are not only willing to protest, but protest on behalf of women's rights.

And how did the school officials respond? Principal Adrian Ramirez was supportive of the protest, and ready to listen to the students. He told Yahoo he was happy to start a conversation about the dress code:

It’s been a really good process for me as principal to sit down and hear where issues arose. We would never blame a female student for another student being distracted by something they wore. The other thing is as a school, we should be looking back and looking at how consistently we address the dress code across campus, and that’s something else students have brought up.

Job well done, fellas. Here's to the future of the evolved male.