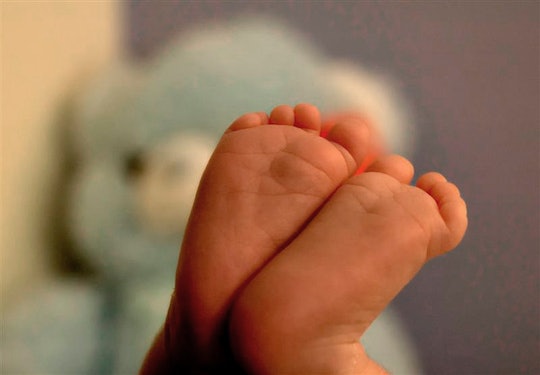 Well, I can certainly think of one little girl who could be looking forward to a little coddling for the foreseeable future. An Idaho family just had their first baby girl in 102 years and I just can't. Even. Imagine. I am a mom to four sons who I adore, but if you told me I would not have little granddaughters to someday look forward to, whose hair I could braid and such... I might lose my mind.

Ashton Undedahl of Post Falls, Idaho, was assuming she would be giving birth to a little brother for her 22-month-old son Archer when she got pregnant. When she found out she was having a girl about halfway through her pregnancy, her husband, Scott, was in shock. She told NBC affiliate KHQ:

He was like, 'Really? Really? Are you sure? He kept thinking, even though we were in the delivery room, he's like, 'What if they made a mistake and it's been a boy all along?'

You can understand his confusion, of course. After going through one of the longest stretches of birthing baby boys I've ever heard of — the last girl born into the Underdahl family was Scott's great-great-great aunt Bernice in 1914 — the news of little baby Aurelia Marie Anne was clearly unexpected.

Scott Underdahl, for one, could not be happier to welcome his little girl, born on April 12. As one of four boys himself, Scott told Fox 31 Denver, "Everyone has been hoping for a girl. Maybe it took more than 100 years to create perfection."

So no pressure there, little Aurelia.

Can you imagine what it would be like to have only boys for more than 100 years? As something of an expert on birthing boys, I can tell you, the noise level must have been off the charts. Not to mention the grocery bills and the pungent aroma the young males of our species tend to emanate from ages 12 to 18. The testosterone buzzing around the joint must be a tangible entity. Even the Underdahl family dogs are boys. (At least I got a girl dog who I named Lily and treat as though she is my daughter, though she still won't let me braid her fur).

Ashton Underdahl has been fielding calls from the media who are interested in her wee princess, but she doesn't mind at all. She told TODAY Parents; "She's pretty special, she's kind of a miracle." She's also looking forward to having the playing fields evened out a little in her favor. "It will be fun. She'll add in some pink and some sweet."

May the Underdahls enjoy both their little boy and little girl in equal measures. Because both boys and girls tend to bring a little sweet and a little salty, which is what makes this grand adventure we call parenting worth the ride.