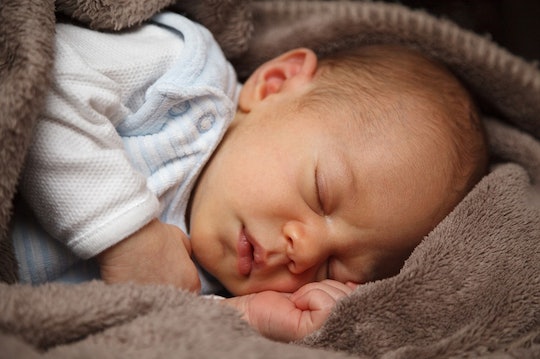 For the past 23 years, the Back To Sleep campaign (now known as the Safe To Sleep campaign) has been trying to spread the word about the crucial importance of sleep safety for babies. The campaign was started in 1994 as a way to remind parents to put babies to sleep on their backs to protect them from possible suffocation in the night. While the campaign has made serious headway, these infant sleep guidelines haven't been followed by everyone, according to a new survey.

The American Academy of Pediatrics recently surveyed nearly 4,000 mothers from 32 hospitals across the country, asking them specifically about how they put their babies to sleep. The study found that only 43.7 percent of mothers intended to put their babies to sleep on their back and managed to do so exclusively. This news is disconcerting, particularly considering the Centers for Disease Control and Prevention's recommendation that babies sleep exclusively on their backs to avoid suffocation and other possible issues that have been linked to Sudden Infant Death Syndrome. So why aren't parents exclusively practicing this important safety precaution? Dr. Eve Colson of Yale School of Medicine and co-author of the study told CNN that this appeared to be a case of intention vs. actual practice.

When some mothers were asked about their safe sleep plan in the survey, one of the main issues they brought up concerning putting babies to sleep on their backs was comfort; they worried their baby might not be able to sleep as peacefully on their back as they might on their stomach. Cultural norms were another deciding factor when it came to sleeping guidelines, especially in African-American communities, according to pediatrician Dr. Rachel Moon who explained to CNN:

While placing babies to sleep on their backs is no guarantee that a child won't die from SIDS, it certainly reduces the risk and is considered one of the important steps in the "ABC's of safe sleep," according to Dr. Deborah Kaplan of the New York City Health Department:

Alone- The baby sleeps without an adult, another child, or a pet.

Back- The baby’s airways are more open while on their back, and despite beliefs years ago that sleeping on the stomach was best.

Crib- The baby should always sleep in the crib with only a firm mattress and a tight-fitting sheet.

SIDS remains a very real threat for babies, particularly in the African-American community where the number of SIDS-related deaths are highest. SIDS is the number one cause of death for children under one year of age.

While placing babies on their backs is no guarantee, it reduces the potential risk factor.