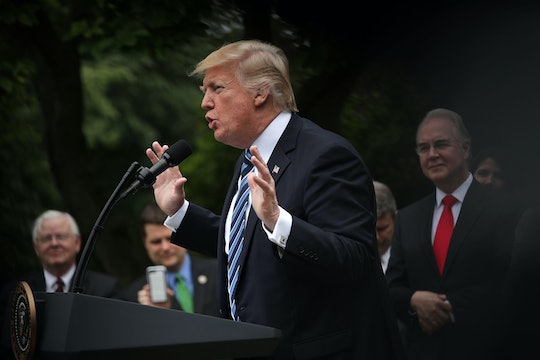 Insurers Could Reject These Jobs Under The AHCA

As the American Health Care Act heads to Senate, many Americans are wondering if they'll soon be facing the same health insurance challenges that they struggled with before Obamacare came into being. While pre-existing conditions have received a lot of attention from critics, there's another group of people who may suddenly find themselves facing higher premiums under the AHCA: Americans with risky jobs may have trouble getting insurance under Trumpcare, due to some insurance companies' list of "ineligible jobs."

Under the AHCA, insurers wouldn't be able to deny insurance to anyone, but insurers would be able to raise premiums for those with pre-existing conditions if states decided to waive their "community rating" protections. Waiving community rating guidelines would open Americans up to medical underwriting, a pre-Obamacare practice in which insurers weighed clients' medical history — and, in some insurance companies' cases, how risky their job was.

States' ability to opt out of community rating protections, coupled with states' ability to opt out of essential health benefits and instead offer leaner, bare-bones policies, could mean people in higher-risk jobs would face higher premiums. And the number of jobs affected are numerous: a Kaiser Family Foundation review looked at one insurance company's list of "ineligible occupations," which included 27 jobs considered too high risk to insure.

While insurers wouldn't be able to decline those in high risk occupations under Obamacare, the new health care system could see them placed in "high risk pools" that would face higher premiums. Until a final version of the AHCA is straightened out in the Senate (and that is if a version of the AHCA even passes the Senate), those details won't be too clear. However, those with pre-existing conditions — whether medical or occupational — should probably make their senators aware of their concerns regarding the American Health Care Act sooner rather than later.