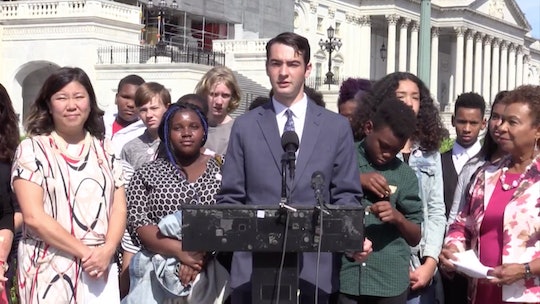 As thousands of students across the United States attended Global Climate Strike rallies, it's clear that many kids want climate change taught in schools. And, now, an impassioned group of them are working with Congress to turn their demands into a reality. On Thursday, several children stood alongside Rep. Barbara Lee as she announced plans to introduce a House Resolution they had helped her create in support of teaching climate change in schools.

"In America, more than 25 percent of American students are taking action to urge us to address climate change — and in large part, that's why we're with you today, because of the power of young people," Lee told reporters Thursday at a press conference held outside the House of Representatives. "We're facing a global climate crisis and we can't wait any longer to do something about it."

At least a dozen kids joined Lee on Sept. 19 to discuss the need for climate change education. Among them was youth climate advocate Jonah Gottlieb, a 17-year-old senior from Petaluma, California, who works with the National Children's Campaign and their environmental initiative, Schools for Climate Action. According to Gottlieb, students first began helping Lee and her team create the resolution back in June.

"We feel, at the National Children's Campaign and Schools for Climate Action, that it is so important for young people to be educated about this crisis because without knowing about the issue, there's no way our generation can rise up and show the world that we need urgent climate action," Gottlieb told reporters.

The resolution Lee is set to introduce will reportedly stress the need for establishing "comprehensive climate education" in schools across the United States. "In order to effectively act on our changing climate, young people need education on its causes, consequences, and its possible solutions," the California congresswoman said Thursday. "We need to teach every young person the human impact of climate change and how to address the warming planet before it's too late."

According to the National Children's Campaign, Lee's resolution will also declare climate change to be a "social justice, racial justice, and human rights issue that disproportionately affects students of color, students in poverty, thereby exacerbating existing inequalities and limiting equality of opportunity."

The resolution will also refer to a California Association of School Psychologists' resolution brought forth earlier this year that deemed climate change to be a potential threat to children's psychological and social development. It has been endorsed by the American Federation of Teachers, the National Association of Geoscience Teachers, the National Center for Science Education, and the Sierra Club, to name only a few, according to Lee's office.

While the topic of teaching climate change in schools may be a controversial one in Washington, it doesn't appear to be nearly as divisive a topic among parents and educators. In fact, a NPR/Ipsos poll released in April found that more than 80 percent of parents in the United States supported teaching climate change in schools. And in a separate poll conducted by NPR, 86 percent of U.S. teachers said they supported the idea.

Additionally, many schools may have already begun adding climate change to classroom lesson plans, despite the lack of a federal requirement to do so. In a March 2016 report examining how climate change is taught in America's public schools, the National Center for Science Education found that "climate change is widely taught in U.S. public schools" with roughly 75 percent of public school science teachers devoting time to the subject. The report noted that "almost all public school students are likely to receive at least some education about recent global warming" and that teachers were found to be "covering the essential topics" (such as the greenhouse effect, carbon cycle, consequences of climate change, and actions to alleviate global warming) with students.

All but 10 states have adopted education standards that, in one way or another, require climate change to be taught, but there remains no federal policy, Scientific American reported. While that's partly because education is primarily perceived as a responsibility of state and local governments, it's likely also due to the number of politicians who continue to cast doubt on climate change science. At least 150 members of Congress — all Republican — are reported by the public policy research and advocacy organization known as The Center for American Progress to not believe that human activity has had an impact on climate change.

But as students across the United States made clear with their attendance at Global Climate Strike marches on Friday, many kids value their science education and are eager to raise their climate literacy. Meaning, national education standards requiring comprehensive climate change education may be well received at schools across the country.