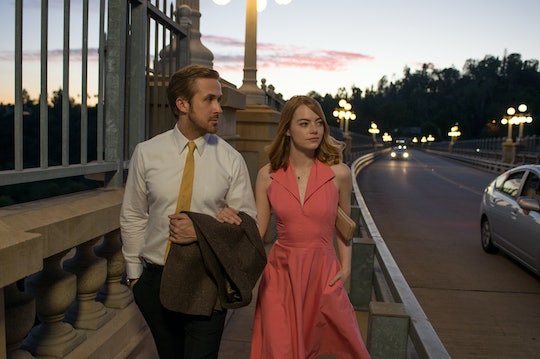 The Best Of The Best 'La La Land' Memes

La La Land went in to Oscar night with seriously high expectations from basically every critic out there. The film was nominated for a record 14 Oscars, including Best Picture, and it seemed like a foregone conclusion that the modern day musical was going to win, which is why these La La Land memes are like taking a quick trip down memory lane to how people felt when they first watched Ryan Gosling and Emma Stone dance and sing their way around Los Angeles. Enchanted, confused, happy, sad... all the feels. Just all of them.

The runaway feel good (or mostly feel good at least, because c'mon, that last scene... ) hit of 2017 was a bit of a gamble for La La Land director Damien Chazzele. Happy, colorful musicals where people frequently dance about and break into spontaneous song haven't exactly been critical favorites for the past, like, 50 years. In fact, according to The Huffington Post, there have only been 10 musicals to win the Best Picture Oscar in the 89 years since the award show began. But there was something so special about La La Land, so infectious and forthright about it. As NPR's Linda Holmes describes La La Land:

It's just gorgeous, like a flipbook made of dreamy vintage postcards that are somehow about contemporary life in Los Angeles.

So how did the internet feel about La La Land? A heaping plate of sigh with a generous side portion of swoon.

La La Land tells the story of aspiring actress Mia (played by actress Emma Stone and co-starring every single perfect jewel-toned dress you've ever seen in your life), and struggling jazz pianist Sebastian (Ryan Gosling, moodier and therefore tastier than he's ever been). The two are trying to find their footing in Los Angeles, and end up falling deeply in love along the way. Sad things happen, and I'm not going to ruin it for you so I'll let the memes do the talking.

Although many were caught up in an emotional maelstorm, it was all worth it. Because dancing and sparkling lights and singing and pretty.

Some felt inspired the instant they walked out of the theater to try a little dance-walking of their own (also this needs to be a recognized form of everyday exercise, guys).

And let's not forget the singing. Or the fact that John Legend played "City of Stars" at the Oscars.

Unfortunately, we don't actually get to live in La La Land . And there's always that one person who likes to remind us.

As Oscar night wore on, people started to get some strong feelings about La La Land's odds for winning.

In a weird way, it doesn't matter what happens at the Oscars. Because so many people felt inspired by the movie, or felt happier after seeing it, or worse in that good way that means you were emotionally attached to the characters. It moved us, and got us moving. So win/win all around, I suppose.