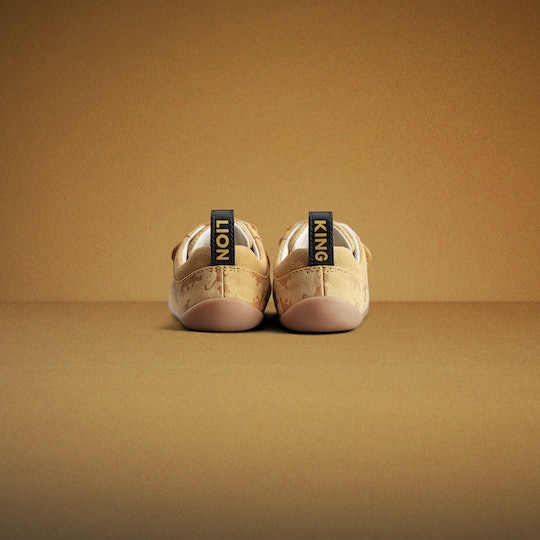 The 2019 remake of the Disney classic, The Lion King, hits theaters in just a matter of days, and parents and kids alike are undoubtedly excited to see their favorite characters come to life once again on the big screen. But beyond just watching Simba, Nala, and the rest of the Pride Rock crew, your little ones can also done these new Lion King shoes from Clarks Kids to really show off their Disney love.

That's right, babies and toddlers can now attend the premiere of The Lion King in style when it makes its way to theaters nationwide on Friday, July 19, thanks to some new kicks from Clarks Kids. In honor of the release of the remake of the animated 90s classic, Clarks Kids collaborated with Disney to release a special pair of shoes fit just for your little lion cub.

The pair of shoes designed for the collaboration perfectly encapsulates the spirit of the original film and the updated version. The shoes are named "Roamer Wild" (perfect for any new walker learning how to "roam" themselves), inspired by Simba's adventurous spirit.

The neutral, desert-colored, lion printed velcro shoes are outfitted with underfoot cushioning and a flexible rubber sole, which encourages new walkers to get on their feet and start exploring, just like Simba. To top it all off, the shoes come with super adorable tabs on the back that say "Lion" and "King," paying homage to the original source of inspiration, of course.

These adorable shoes are now available on the Clarks website for the cool price of $45.

It's only fitting that this pair of shoes designed especially for toddlers and babies is coming out alongside the premiere of The Lion King. In case Disney fans need a refresher, The Lion King follows along a young lion prince, Simba, who leaves his home after his father's death. Upon leaving his home, he meets a cast of characters who inspire him to return to home and claim the land, Pride Rock, that belongs to him. It's an inspiring film that highlights the importance of family, love, and sacrifice, according to Common Sense Media. And although your little one might not be trying to claim a kingdom any time soon, these shoes seem like a great place for them to learn how to adventure.

This isn't the first time Clarks has collaborated with Disney to bring some super cute shoes to the masses alongside the release of some pretty major movies. Clarks and Disney have released shoes for the premiere of Toy Story 4, and even have a Marvel collection for your little super hero. These shoes not only inspire kids to get on their feet, but are also cute enough to please even the pickiest toddler.

Just like Simba in The Lion King couldn't wait to be king, it's just as likely that your own kiddo can't wait to get these super adorable shoes on their feet and set out on some adventures of their own.