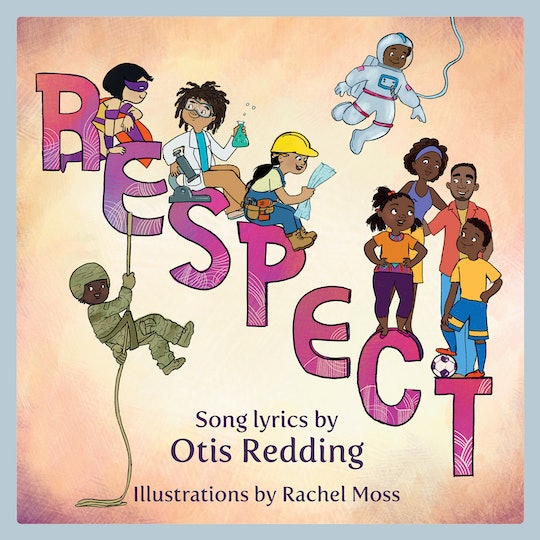 “R-E-S-P-E-C-T, find out what it means to me!” Now that I have this legendary song in your head, has it ever occurred to you that it's the perfect kind of language for a children's book? There's a reason lyrics are so, well, lyrical, and the second round of a new musical picture book series coming out in early October has found that, too. LyricPop picture books will be releasing four titles on October 6, featuring your favorite song lyrics as illustrations in picture books, including a book featuring Otis Redding's iconic “Respect," which was performed by legendary Aretha Franklin.

The three other picture books in the series include We Got the Beat, These Boots Are Made for Walkin’, and Move the Crowd, and each book features beautiful illustrations that tell the story of the lyrics on each page.

These picture books are coming out of publishing house Akashic Books, a company whose tagline is “Reverse-Gentrification of the Literary World,” which makes these books even more special in my opinion. Akashic books is Brooklyn-based, and focuses on publishing by “authors who are either ignored by the mainstream or have no interest in working with the ever-consolidating ranks of the major corporate publishers,” according to their website.

“We are looking to include a wide range of musical genres — including rhythm and blues, rock, pop, punk, hip hop, and country — to create books that appeal to a diverse array of children and families,” said publisher of Akashic Books Johnny Temple.

Respect tells the story of a young girl exploring the concept of mutual respect, and it’s empowering on multiple levels not only because of the content, but because the cast of characters in the book are super diverse. We Got the Beat is also a diverse book, with a “celebration of dance and play,” per the description. Nancy Sinatra would be proud of These Boots Are Made for Walkin’, as the story is told by a jealous cat. And iconic hip hop song Move the Crowd is beautifully illustrated in this picture book as and tells the story of a young Black boy’s imagination coming to life through beats and lyrics.

All of these books in the second series will be available for purchase on Oct. 6 and will cost $17 each. But you can preorder them now on the Akashic Books website.

More Like This
The 55 Best Chapter Books For Kids At Every Age
What Age Do Kids Start School? Here’s What You Need To Know
13 Kid-Friendly Ghost Stories For Littles Ones
15 Adorable CoComelon-Themed Costumes You Can Buy Or DIY