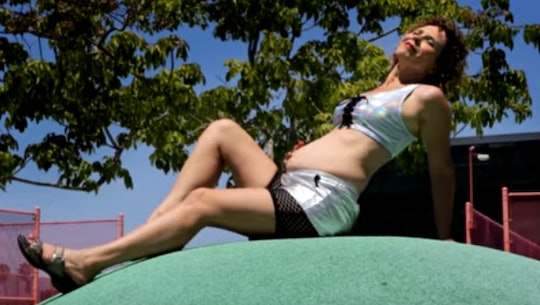 This Parody Of "Baby Got Back" Shows Off *Real* Postpartum Bods, & We’re Here For It

After having four children, I can tell you with absolute certainty that babies change your body. It's worth it, of course. But still, there's this little stubborn pouch most moms (especially new moms) carry around like a badge of honor. Because they carried humans in there, and it took a whole lot of work getting them out. Those pouches, or bumps if you prefer, should be celebrated. And so this parody by moms who took on "Baby Got Back" should be considered an anthem for the mom bod. Because it's a thing, and it's OK that it's a thing.

The three moms who form the comedy troupe Moms You'd Like To Friend, Masha Sapron, Cat Deakins, and Larissa Hahn got talking about the nature of the postpartum body recently. It seems Sapron was looking down at her own post-baby bump and feeling as though she was a little alone. As she told Romper:

I thought I was the only one until I started talking to Cat and Larissa and we started laughing together and the hard times in parenting always seem a little bit easier when you laugh about them... in the company of moms who "get you."

After their conversation, Sapron decided to write a song as a sort of ode to the postpartum body. And naturally, she turned to Sir Mix-A-Lot's "Baby Got Back," because why not? Except this time around, in honor of Love Your Body Day on Wednesday, the women released their own postpartum version. Called "Mama's Got Bump."

The lyrics are hilarious and oh-so relatable to moms who weren't able to just "bounce back" after being pregnant for nine months. So, pretty much all moms.

You other mamas can't deny,

When a girl walks in with an itty bitty waist,

You wonder if she's ever faced childbirth.

Masha Sapron, the writer of the parody, told Romper that she wrote it as a celebration of the way a woman's body actually looks after having a baby, not the way it seems when it's covered up by cleverly designed duds. Cat Deakins, who shot the video — which has been viewed more than 2 million times — agreed, telling Romper:

Some people look "normal" in clothes that are designed to hide our bodies, and that's why it was important to let it all hang out and be "real" to show the mummy tummies being hidden underneath all the loose, button down shirts and mom pants.

The response to the video, which features real moms proudly showing off their real bumps dancing around a playground, has been tremendous, according to Deakins. "One thing we're really excited about is so many women saying they felt better about their mummy tummies after watching the video! That's really what we were aiming for," she told Romper. "Laughter is great medicine, and sometimes that's all you need to turn a disaster into a good day."

Sapron also noted that she was inspired by Lena Dunham's character in HBO's Girls to become more comfortable with her body.

"This is so true! I needed to hear it. I've always been self conscious about my belly bump. But 3 beautiful kids later, I'm feeling better!" one Facebook user commented.

Another viewer wrote: "I LOVE this video, I have had 6 kids (including twins) and another on the way and I am REALLY self conscious about my body right now. but it makes me feel like I am not alone and soooo many other women out there that are just like me too....it doesn't help that I suffer from BDD but it dose help knowing I'm not alone."

At the end of the day, these women are trying to make women feel more comfortable with themselves. And that's exactly what these parody videos are doing.