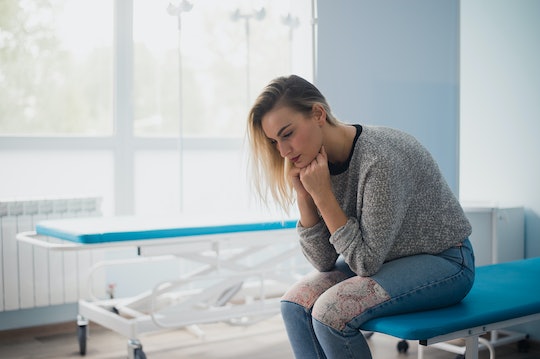 Most women with access to health care are used to getting Pap smears at their routine gynecologist checkup. But the new cervical cancer screening guidelines released by the U.S. Preventive Services Task Force is now recommending that women in their 30s ask for another test that detects the dangerous type of HPV that can cause cervical cancer.

As it stands now, Pap smears are recommended for women every three years between the ages of 25 and 29 years old (which is less often and older than it used to be). The test spots pre-cancerous abnormalities way ahead of time to prevent cancer. However, women in their 30s are more likely to have the strain of HPV that causes cervical cancer, or have had the strain of HPV gone undetected due to lack of screening, which can lead to cancer, according to the task force.

These days, women in their 30s can be offered a Pap-plus-HPV test that can detect cancer way before its harmful (cervical cancer develops slow enough that these tests are often enough so far). But there are sometimes false positives that can lead to unnecessary treatment, according to the task force.

Instead, it's proposing that women in their 30s have the choice to get a Pap smear every three years or an HPV test alone every five years. The task force is taking public comments until Oct. 9 for its proposal, when it will be revised and then sent out.

Both tests are sufficient to prevent cervical cancer, but many countries, such as the Netherlands and Australia, are already phasing out Pap smears altogether and just using the HPV test as the main screening test. “Most experts in this area are in agreement that HPV testing alone is the future of cervical screening,” Debbie Saslow of the American Cancer Society, who wasn’t involved with Tuesday’s draft guidelines, told the Associated Press.

The HPV screening can cost up to twice as much as the Pap smear, but it's done less often — so it's sort of a trade off. But all women, especially women in their 30s, who are at the most risk for cervical cancer, should discuss screening with their doctors and see what's best for them.

Here's the thing about HPV — according to the Centers for Disease Control and Prevention almost everyone will get at least one strain of HPV in their lifetime, although only some strains cause cervical cancer. This year alone, an estimated 12,820 American women will be diagnosed with cervical cancer, and about 4,200 will die from it. Even though we know how to vaccinate against it, screen for it, and treat it.

Cervical cancer is simple to screen for — with a Pap or HPV test — and can usually be caught early to treat. No one should have to die from it, which is exactly why HPV and cervical cancer screening was part of the Essential Benefit Program under the Affordable Care Act, aka Obamacare. Health insurance companies were required to cover them for women, just like prostate exams, birth control, and other essential health services.

If the Republicans follow through with their plan to repeal the ACA and replace with anything resembling one of the bills the GOP presented this year in both the House and Senate, more women's lives will be at risk.

Of course, all of this can be prevented with the HPV vaccine, which is recommended for both boys and girls at the age of 12 years old. The HPV vaccine can prevent up to six strains of the virus, preventing cervical cancer altogether, yet it remains controversial.

Whether it's because parents don't want to think about their kids getting the most common STD at just the age of 12 or lack of information and access to the vaccine, only about half of teens actually finish the series, according to a recent report.

Hopefully, with the spread of information about the HPV vaccine and these new guidelines for women in their 30s, more women's lives could certainly be saved. Because with everything the medical community knows about the cancer-causing virus, no one should be left to die from it.