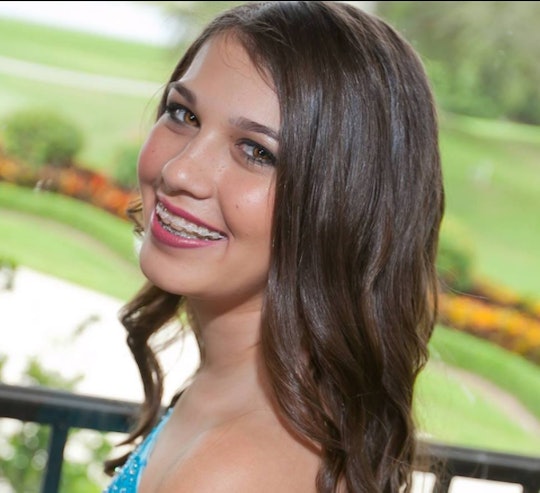 She wanted to be an occupational therapist when she grew up. She wanted to be a mom. She was already a dancer. And I guess we will never know what else she was going to be, because Jaime Guttenberg was killed by a lone gunman who entered Marjory Stoneman Douglas School in Florida and opened fire. He killed 17 people including Jaime, who was just 14 years old, on Wednesday. And now people who never met the young dancer are taking strides to make sure she's never forgotten. This weekend, dancers from around the country will take part in #orangeribbonsforJaime, as a way to honor her memory and pay tribute to the woman she might have been, if she'd only had the chance.

In the hours after the shooting at the Parkland, Florida area school, Jaime's family sent out a plea to help find her. They had lost contact, and were looking to social media to try to track her down. Sadly, their worst fears became reality when they found she was one of the victims of the senseless, barbaric shooting at her school. Her father, Fred Guttenberg, gave a heartwrenching speech about his daughter during a candlelight vigil on Thursday night, saying that this was "impossible" for him to accept. He described Jaime as "the life of the party, the energy in the room, she made people laugh, and she was always known."

There is nothing that can truly assuage this father's grief. No platitude eloquent enough, no embrace tight enough. But hopefully he will take comfort in this knowledge; on Saturday, dancers all around the country are taking part in #orangeribbonsforjaime, wearing an orange ribbon to remember a young dancer lost in a preventable tragedy.

Dancers from New York, Texas, Florida, Illinois, and California have all taken to Twitter to say that they plan to wear orange ribbons for Jaime Guttenberg. A Los Angeles-area mom came up with the idea to wear ribbons at dance competitions around the country this weekend. They are orange because that was, apparently, Jaime's favorite color.

The wear orange ribbons and t-shirts to honor her, certainly, but more than that to make sure she is remembered. As an individual, not simply another name on a victim's list.

People wear orange to remember Jaime the way her aunt, Abbie Guttenberg Youkilis, remembered her in a viral Facebook post called, "Dear America," where she described her niece:

Jaime was in the 9th grade. She was a pretty girl with the world’s best smile and her soul was sensitive and compassionate. She was intelligent and feisty and she danced with beauty and grace. She always looked out for the underdog and the bullied and she probably had been kind to the student who shot her. She planned to grow up and become a mommy and an occupational therapist.

Nobody wants to forget Jaime Guttenberg; not even the dancers for the American Ballet Theatre, where professional dancers shared a post on Instagram showing orange ribbons affixed to their costumes.

All over the country this weekend, people will be dancing for Jaime. She'll be present in auditoriums, in concert halls, in theaters and dance studios. The memory of Jaime Guttenberg and the senseless violence that cut her life so terribly short will spread through the country, one orange ribbon at a time. It's a lovely tribute, one her family might appreciate through the terrible fog of their own crippling grief.

Wearing an orange ribbon for Jaime will keep her memory alive, even as her family plans her funeral.

Because I guess that's the cold, awful reality, isn't it?