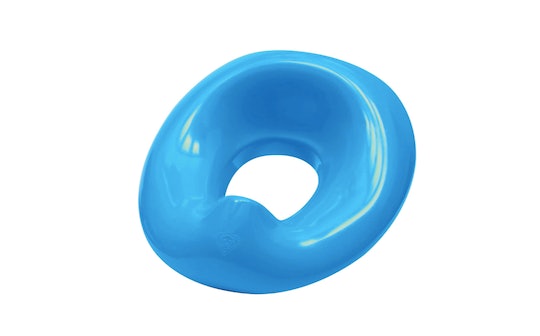 As difficult as many parents might find potty training to be, odds are they aren't worried about their child's actual safety as they learn to use the toilet with certain helpful devices. Unfortunately, that was not the case for one family. A couple from Riverside, California is reportedly taking legal action after their 3-year-old son was allegedly nearly dismembered by a potty seat.

According to CBS Los Angeles, a lawsuit filed in Riverside County Superior Court, the unnamed family bought their 3-year-old son a WeePOD Basix Potty Ring from Target back in June of 2017. When their son tried to use it, the parents claim that the boy's genitals reportedly got stuck to the device, and his penis was "lacerated and nearly dismembered" when he was removed from the potty seat, CBS Los Angeles reported.

Family attorney John Kristensen told The Press-Enterprise that the alleged incident was witnessed by the young boy's brother. Kristensen also told the outlet that the boy's penis had to be "glued" back together because the doctor didn't want to use stitches on such a sensitive area. The little boy's parents have reportedly filed a lawsuit against Target and Prince Lionheart Inc., the maker of the potty ring, for undisclosed damages, according to CBS Los Angeles.

Romper's requests for comment from Target, Prince Lionheart (the potty ring's manufacturer) as well as the family's attorney, John Kristensen, were not immediately returned.

The lawsuit filed by Kristensen also contends that both Target and Prince Lionheart Inc. were made aware of alleged issues with the popular potty training seat as far back as 2015, according to CBS Los Angeles:

Target and Prince Lionheart knew there were problems with this defective potty-training device, knew of prior complaints but refused to take the product off the shelf. They had a duty to warn customers about the dangers of their WeePOD product. Their failure to do so was reckless and led directly to the mutilation of my client.

When checking current reviews for the WeePOD Basix Potty Ring — which sells for $14.99 on Target's website — there were a few complaints about the seat. One reviewer noted the lining of the seat cracked easily, while several reviewers claimed the material of the seat gave their child a rash. There didn't appear to be any complaints from users regarding the safety of the seat.

Yet the recent lawsuit reportedly claims another child in Virginia sustained a similar injury in 2015. According to The Sacramento Bee, the lawsuit shared a statement made by the Virginia parent:

My 4 year old son was going to the bathroom on his wee pod basix potty seat and when he stood up he started screaming. He had a nasty cut on the base of his penis and it was bleeding a lot. My husband and I cleaned him up and took him to the doctor.

The lawsuit claims that "where the parent’s 2015 comment was posted 'is no longer available due to Target's malfeasance,'" according to the Miami Herald.

Target spokeswoman Jenna Reck offered a statement regarding the incident in June 2017 involving the 3-year-old boy to The Sacramento Bee. "We take product safety incredibly seriously, are committed to providing safe products to our guests and require our vendors to follow all product safety laws and CPSC guidelines for the products they sell at Target," Reck told the publication.

Kelly McConnell, the CEO of Prince Lionheart Inc. also shared a statement with The Sacramento Bee. "The safety of children is our number-one priority," McConnell told the publication. "All of our products are tested by third-party accredited testing houses and either meet or exceed all applicable domestic and international standards."