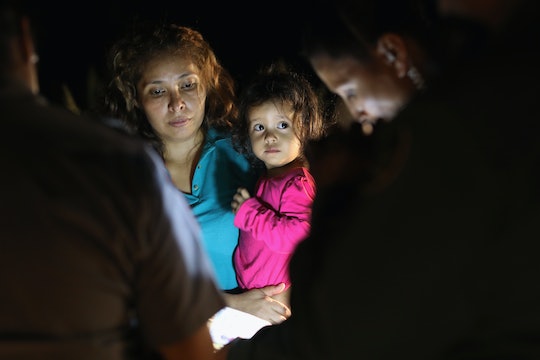 Whenever something happens in this world that sends me into a spiral of despair I have this quote from Fred Rogers of Mr. Rogers' Neighborhood that brings me endless comfort. As he once said, "When I was a boy and I would see scary things in the news, my mother would say to me, 'Look for the helpers. You will always find people who are helping.'" It's something I always try to do, look for the helpers. And this time I didn't have to look too far. Amid reports that thousands of migrant children have been separated from their parents at the border, these parents have raised over $5 million to reunite immigrant families, according to NBC News.

Charlotte and Dave Willner from Silicon Valley in California were spurred into action by one picture, as they told the San Jose Mercury News; a photo of a 2-year-old girl from Honduras crying as border agents patted down her mother in Texas. The photo quickly went viral as a symbolic representation of the Trump's administration's "zero tolerance" policy of separating migrant parents from their children at the southern border, as TIME reported. According to NBC News, nearly 2,000 children have reportedly been separated from their parents in the past six weeks, and are have been placed in detention centers.

These aren’t kids we don’t have to care about. They’re like our kids. When we look at the faces of these children, we can’t help but see our own children’s faces.

Dave Willner added, according to the news outlet, "This is the closest thing we could do to hugging that child."

And so they used their far-reaching network to raise money for the Refugee and Immigrant Center for Education and Legal Services (or RAICES), a huge legal service provider for immigrants in Texas. They initially set out to raise $1,500 to help immigrant families reunite, but they surpassed that number almost immediately.

Their fundraising campaign was started on Facebook just four days ago, and since then they've managed to raise more than $5 million by 125,000 donors, including Facebook executives Mark Zuckerberg and Sheryl Sandberg, as of Tuesday afternoon. The campaign really started to go viral on Saturday morning when one donor offered to match a $25,000 donation. As NBC News reported, at one point the campaign was raising $40,000 per hour.

The Willners are understandably thrilled by the response. "What started out as a hope to help one person get reunited with their family has turned into a movement that will help countless people," Charlotte Willner told Romper in a email. "Regardless of political party, so many of us are distraught over children being separated from their parents at the border." She continued:

We can’t all be on the frontlines to help these families, but by supporting RAICES, we’re able to do something that just takes less than a minute, and collectively have an impact. When we all come together in community efforts like this, we can find an antidote to the feelings of helplessness. This is just the start though, and donating is the easy part, so our hope is that people continue to be hungry for information and get involved.

The money raised for RAICES will go to "directly fund the bond necessary to get parents out of detention and reunited with their children while awaiting court proceedings," and will ensure that each child in immigration court in Texas will have legal representation, according to the fundraiser's Facebook page.

We've been occasionally crying around the office all day when we check the fundraising totals. This is such a profound rejection of the cruel policies of this administration. Take heart. There are terrible things happening in the world. And there are many people who are deciding not to look away but to do something. Thank you. Thank you. Thank you.

As horrifying as this situation continues to be, as bleak and dark as this world can seem when children are being torn away from their children, this fundraising campaign from the Willners is a beacon of hope. That there are always going to be helpers who step in when things get unbearable.