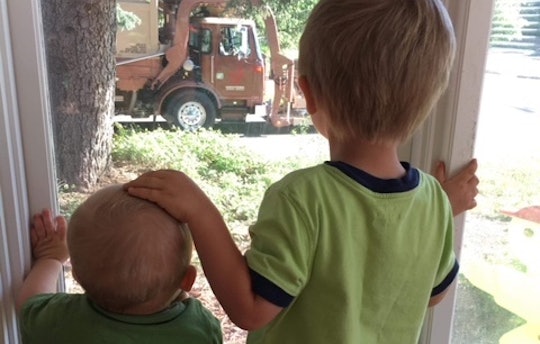 These Families Went Screen-Free This Summer — Could You?

We think about days spent in the pool playing Marco Polo and riding bikes until the sun sets, chasing ice cream trucks or spending nights immersed in nature at sleepaway camp, but summer increasingly entails an abundance of screen time. Between television, streaming sites like Netflix, mobile devices, video games, YouTube and IPhones, there are many options for diverting a busy, energetic child. But some parents who fear their child “disconnecting” from the “real world” declared 2018 to be a screen-free summer — no iPads, no cellphones, no Instagram lenses, no afternoons slouched in front of the TV.

“Most people — and myself in particular — aren’t great at limiting their kids’ exposure to one episode of Daniel Tiger every day. If they are— mazel tov!” Michelle Ziecheck, a parent to a 5-year-old daughter, tells Romper.

Iona Finica, who also went screen-free this summer, says her 3-year-old daughter would have tantrums every time she took the media away from her and in some cases would only calm down if she could watch cartoons.

In 2016, the American Academy of Pediatrics issued new guidelines for screen-time for children, calling for no screen-time before 18 months of age, and a maximum of one hour “quality” screen time for children 2 and older. So what happens when you disavow yourself of tech altogether?

Four years ago, I committed to taking a six-month break from the screen with my my then 3-year-old daughter as I became anxious about her screen dependency — and about mine. I was determined to unplug. I hired a personal assistant to handle all of my social media and email correspondence and we did away with the screen and didn’t look back. Within a week, I found that my conversations and experiences gained a newfound level of focus, calm, and intention. This extended to both my parenting and my business, and resulted greater connection in the relationship between my daughter and I.

I wanted to them learn how to be bored, be creative, and not be addicted to screens.

It is this experience of deep connection that inspired a mother of two, Kristine Bastin, to commit to screen-free parenting this year. “We decided to go screen-free mostly because of the way I see people become so disconnected with each other by trying to stay connected online. I wanted a strong connection with my kids and I wanted them to have a strong connection with their environment and the people they meet in life,” she says. “I wanted to them learn how to be bored, be creative, and not be addicted to screens.”

Moreover, these parents believed that it changed their children for the better. “She was starting to be more calm, her vocabulary grew, she was learning from books and activities, and she now is very patient in a task,” Finica says of her child.

She also believes that the digital hiatus helped her to connect more closely with her daughter. A recent article in The Atlantic explained how screen-distracted parents break the “conversational duet” that usually takes place between a parent and child. The concern, wrote Erika Christakis, was that this new behavior pattern would rupture our “ancient emotional cueing system, whose hallmark is responsive communication.”

In my six-month experiment, that was certainly my experience. I was able to slow down and savor the moments happening around me, connect with the people and the world around me in more profound ways, and be the parent that I really wanted to be. I felt these profound changes in myself but I also saw them within my child. I saw my daughter’s creativity and curiosity soar.

Shane has noticed both a calm and developed sense of empathy in her child since going screen free.

I didn’t notice these things before as I thought her biggest hobby was watching cartoons. I was very wrong.

Finica says the screen-free experience didn’t only affect her child, but her relationship with her daughter. She explains that after the family went screen-free, her daughter’s focus and attention toward her mother’s words blossomed and that, as a mother, she started paying much more attention to her daughter’s needs and interests. “I discovered she likes doing art projects and loves painting. She also loves music. I didn’t notice these things before as I thought her biggest hobby was watching cartoons. I was very wrong. We are much more connected now and we understand each other. I know her and she knows me.”

Parents didn’t just get back that idyllic summer by banishing tablets from their homes. Michelle Ziecheck has a background of ADHD, as does her family, and says that a summer as a neo-luddite helped her to be mindful and creative as a parent. “Which is not to say that I’m constantly entertaining my kid or doing Pinterest-worthy projects. Far from it. But when you decide screens are not an option, it’s amazing how you make do.”

Of course, it can be challenging. “If the weather is bad, that may mean running errands at the mall and taking advantage of a free play place or something. But that eats up 70 percent of my day right there,” says Ziecheck.

And, as other parents have found, even if you put away the screens in your own home, there are video screens in museums, and in restaurants — and even in doctors’ offices. Unless you live in a cave and only take your kids out blindfolded, they’re going to encounter screens starting in infancy.

Shane observes that when she brings out the phone for FaceTime calls with her daughter’s grandparents, she notices a significant shift in her behavior.

“For the rest of the day she is often hyper-focused on the phone. We explain to her that the phone belongs to Mama/Daddy and that it doesn’t need to be used now.”

The hypocrisy becomes apparent to children when parents who declare technology off-limits to their children continue to use screens. Ziecheck says that although she went TV free when her daughter was 1-year-old, “I still struggle with being online — although mostly when she's not with me — or distracted by my phone (social media and the like), but am working on it.”

On the far end of the spectrum, there are those who emphasize the importance of teaching children how to find their way around technology — an approach that raises the question: by depriving their children of educational apps and movies, are these parents setting them up for failure in a connected world?

Dr. Yalda Uhls, a psychologist and author of Media Moms and Digital Dads, says in her book that media and technology are not ruining childhood and kids are adapting just fine. Uhls explains that this doesn't mean we shouldn't teach our kids balance and appropriate behavior (online and offline), but does mean that excessive worry is not useful for most parents (or their kids).

“I’m not worried that she won’t be able to use technology, since it’s so intuitive now that literally babies use it — even my daughter knows how to swipe,” says Ziecheck.

Meanwhile, Romper writer Hillary Savoie emphasized technology’s power to connect differently abled children in a recent essay. “At worst,” she said of anti-screen parenting philosophies, “it contributes to a judgmental Othering of her [daughter’s] activities by suggesting that screen time is a shameful activity that is inferior to the kinds of play that my daughter cannot take part in.”

Parents like Finica, who is an attorney, say that the experiment of going screen-free has simply helped them appreciate periods of down time. “The days we do go screen-free are amazing in their own way, we find ourselves actually talking to people face to face and actually listening, not just talking in order to be polite.”

Of course, summer will end, and the grand experiment with it. Finding a way to continue to do without is the challenge.

“We have this sign in our house and encourage our friends or family to stay off their devices in our home, too!” says Bastin. “We are only on our phones in the evening or during nap time. It’s hard sometimes, but it’s so worth it. I don’t want to miss any moments with my kids!”

After my six-month offline experiment was up and I returned to the internet and the screen, the online world felt jarring. But I discovered the importance of balance regularly taking weekend breaks, one week or even one month breaks from the internet to return to my body and my intuition, to return to my grounded self and the parent that I love to be. I had found the secret to slowing down time and it was as easy as shutting down all of your devices.

“In such a short time she will grow up and no longer want to have dance parties, want to be held or snuggled with as we read books on the sofa. I believe being screen free brings us closer, in the best moments, and in the hardest moments of parenting,” says Shane. “She knows she is loved and that I want to spend time with her.”