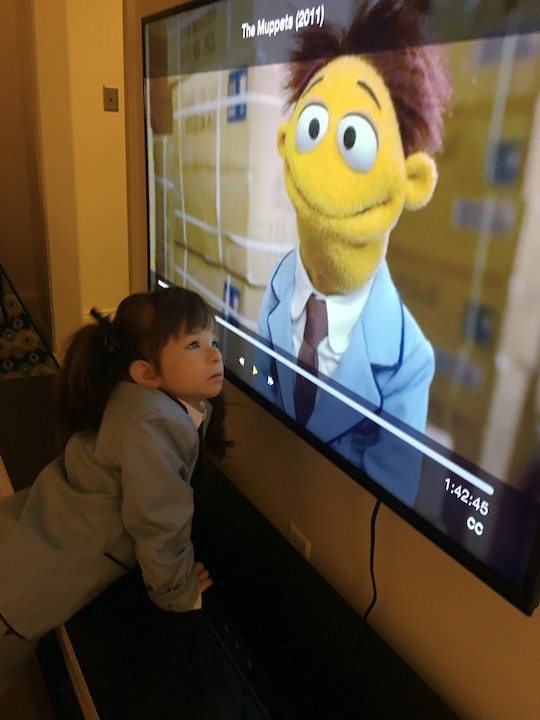 Before You Ban Screen Time For Your Kid, Consider Mine

Screen time catches a lot of flak. At this point it seems like everywhere you turn you can find screens mentioned somewhere in every list explaining of why “kids today” are whatever they are. Psychology Today warns of "lifetime consequences" for children's brains from too much screen time. Global News warns screen-related myopia is an "epidemic." Business Insider ominously warns that Silicon Valley parents — the creators of this tech — are banning screen time for their kids.

It can also be subtle, part of the one-upsmanship that goes on among parents who look on judgmentally as your kid plays a game on your phone. “Oh, we don’t let our little one have screen time” they say (when you totally know they’d whipped out Daniel Tiger on their phone to get through a meal at a restaurant).

And really, if you want to spare your kids the screen — by all means, you do you. But, if you want to know what I think of it? I think you’re letting your kids miss out. Not only are they missing out on the joy of exploring and playing with the technology that will be such an important part of their lives — as they should explore and play at cooking and reading, for example— but they are also missing out on opportunities to connect with children like mine, who rely on screen technology to level the playing field somewhat in accessing the world.

My daughter, Esmé, isn’t able to take part in the kind of activities I grew up doing, as a country kid, like getting stuck up a tree I’d snuck off and climbed at age 2 or scraping my knees repeatedly because I ran too fast on our walkway or being told “it builds character” by my dad any time I hurt myself. My daughter couldn’t sit up at age 2, let alone climb a tree. At age 7, she still cannot walk, let alone run… and her “character-building” childhood pains have been of the sort that happen in children’s hospitals.

Esmé has been medically fragile and developmentally delayed since birth. She was only around 3 months old the first time I realized what a screen could do for her. At the time, she was unable to hold up her head, grasp things with her hand, or move her limbs with much purpose. As a result, she could not participate in the typical activities that newborns do, like grabbing, holding, and shaking a rattling toy… the kinds of activities that let you know that there is a person in there, understanding, learning, and growing. So much of how infants demonstrate intellectual milestones is through their physical interactions with the world — but because of Esmé’s physical limitations, it was impossible to demonstrate her understanding in typical ways. I looked into her eyes and saw curiosity, love, and humor, but there was no way to prove it.

It would be many months before she would grasp and shake even the lightest of toys, but all that time we worked with the iPad in sessions, knowing that she understood more than she could easily show us in the ways that most children can.

One session her physical therapist brought his iPad, with a Duck, Duck, Moose app called “Itsy Bitsy Spider” on it. And within the session it became rather clear that Esmé understood that different sounds happened when she touched parts of the screen. And she liked it, so much so that she smiled and then puked — as was then standard for her most exciting experiences. It was incredibly hard work for her to just drag her hand across the screen. And, it would be many months before she would grasp and shake even the lightest of toys, but all that time we worked with the iPad in sessions, knowing that she understood more than she could easily show us in the ways that most children can. Her interactions with screens gave us the hope and guidance we needed to continue to challenge her.

Screen time has not just been a method to prove her understanding, but it is also a therapeutic tool. Esmé has a form of visual impairment known as Cortical Visual Impairment (CVI). Screens are a way for a child like Esmé to experience things they cannot see out in the world, and they are also a way to help improve vision in individuals with CVI. Early on, Esmé appeared to see only within a 4-foot radius. While she still does not see things like a bird flying in the sky, with vision therapy, much of which uses backlit screens, her visual range has expanded over time to the point that she obviously can see enough to identify a person from across a room.

While other children Esmé’s age were running around climbing trees and skinning knees, my daughter was being bribed into bearing a little bit of weight through her legs in a baby bouncer with children’s shows and iPad time. We now know she was also teaching herself how to read all the while. She was sitting in front of an eye-gaze screen, using the motion of her eyes to play a game where she could smash a pie in a character’s face. She was learning to move her hand with acuity toward yes and no buttons on an iPad. She was watching videos of animals around the world as I taught her geography. And, she was learning about friendship, devotion, and feeling different from obsessively watching The Muppets movie.

Esmé is now 7. While she vocalizes a lot, and understand everything said around her, she still cannot speak. Learning about and connecting with her can take patience and creativity — but it is often a connection that can be mediated with a screen. Connecting with Esmé can happen from a simple greeting exchange using communication program, or it can happen while watching the videos her Muppet friends send her and talking about those important friendships.

She takes these activities seriously. For example, last week her long-time caregiver, Nicole, mentioned to Esmé that she had watched the movie The Muppets, which she has seen dozens of times with Esmé, with her classroom students. Esmé immediately burst into tears. As Nicole talked to her, Esmé offered a rare clear vocalization: “Don’t!”

Nicole asked, “Don’t what? Don’t watch The Muppets with other kids?” Esmé nodded. Watching The Muppets is their activity, together. And doing so is not a passive experience for Esmé. We sing along, we laugh, we talk about the characters, especially her friend, Walter. It is a way to be close with her… and an essential topic of conversation when the screen isn’t present or on.

For these reasons, when parents tell me about their screen-less children, my eyes tend to gloss over… you know, as I’m frantically digging for the iPad charging cord in my purse. Because I am dreaming of more technology for our kids, more fluency in technology, more discoveries that can help make the world friendlier and more accessible for Esmé. Also, I’m thinking about keeping a close eye out, because no child is more likely to try to abscond with Esmé’s iPad/communication device than the kid who’s not allowed to use screens.

Creating very screen-limited childhoods for my daughter’s peers contributes to, at a minimum, a further distancing of my daughter from other children.

Now, I can understand that someone might read all of this and feel that it makes sense for me to prioritize screen time for my daughter, while wondering what Esmé’s use of an iPad has to do with their children’s interactions with screens. To that, I say that creating very screen-limited childhoods for my daughter’s peers contributes to, at a minimum, a further distancing of my daughter from other children. These peers will lack a fluency in the kinds of activities and cues that my daughter lives with, at best. At worst, it contributes to a judgmental Othering of her activities by suggesting that screen time is a shameful activity that is inferior to the kinds of play that my daughter cannot take part in.

In fact, Esmé has been shamed by peers who have said to her (or in front of her) that iPads or the characters who are her bridge to understanding social connections are “bad.” And I have to figure out how to navigate that, because so much of my daughter’s life involves implicit and explicit statements on her value based on her abilities that I’m not interested in letting her feel judged about the things that make her happy and help level the playing field for her.

Beyond that, though, is the hope for me that my daughter’s peers could connect with her through shared interests. I can imagine that the kid who is always fussing with her iPad might just be able to inspire Esmé to use hers more fluently. Or that watching Esmé’s world widen as she uses a communication technology might inspire that same child to grow up and design the next most important accessibility technology, perhaps alongside my daughter.

By no means am I suggesting that screen time should be unlimited or unsupervised, or that other kinds of activities — including ones Esmé can’t participate in — aren’t enriching and wonderful. And, admittedly, I have, at times, used Esmé’s interest in screens in ways that have been shortcuts for my being able to hop on a phone call or take a shower or just sit alone in a room for ten minutes and stare at my own screen… and maybe that’s not ideal. But it is real. (And also, while I was doing that, apparently my daughter was quietly teaching herself to read at age 4, like a stealthy mastermind… so who knows? Maybe it is ideal, and maybe there is some kind of future in a PBS show with Muppets teaching advanced calculus to 6-year-olds.)

So much of parenting these days is dictated by drawing black and white distinctions about what “kind” of parents we are, with respect to sunscreen, organic food, plastic straws, and sugar, or what-have-you, and what ends we will go to in order to allow or not allow our children to participate in all kinds of norms of childhood behavior. And, often, I think, it can be hard to fully understand the repercussion of those limitations — not just for our own children, but also for how our children approach and understand their peers, as well as how they judge them by all kinds of things: what they eat, wear, and play with. And, perhaps there is something to be said for the experience of raising a child with a very uncertain future that just makes all those rules seem like they are a whole lot of unnecessary fuss over stuff that doesn’t matter all that much, in the end. Or at least stuff that doesn't matter as much as our children's happiness, safety, and compassion.

So, perhaps it is also OK if we all are able to embrace that gray space a bit more… to take a deep breath and hand over that tablet with a Yo Gabba Gabba fix, and tell yourself that, maybe, just maybe, your kid will use what they learned there to change the world — even just a little bit — the next time they meet a child like mine.