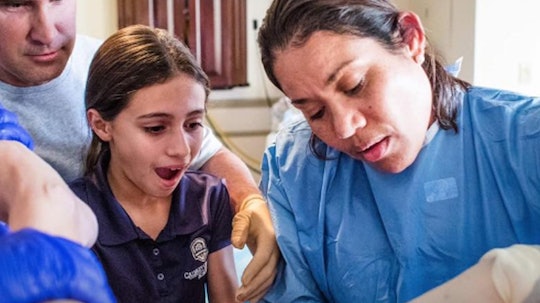 Birth is a magical thing to witness. But I think sometimes there's this idea that children should be protected from it. That there's something almost secretive about the process that could confuse or frighten children, that could have them asking too many questions. Well, maybe, this is the wrong way to look at things. In fact, these photos of a 10-year-old at the birth of her baby sister prove that children could well understand the magic of witnessing a baby born far better than we thought.

Paulina Splechta, a birth photographer from Boca Raton, Florida, captured something incredible recently. She was on hand to photograph her client Catherine Cook deliver her third child, and what's even better? She was also there to watch Catherine's 10-year-old daughter, Kayla, catch her new baby sister, Everly, as she shared on Facebook.

Cook wanted her daughter to be in the room with her and it seems Kayla was definitely interested in being there as well. As Splechta wrote in her Facebook post that has since gone viral: "We did not know what to expect, because birth is so unpredictable. We all knew it may not work out. But what was magical was hearing midwife Laurie Gibbon's words about how this was her patient's birth."

She continued, "Mom and baby were completely safe and healthy during this delivery, and big sister Kayla caught her baby sister Everly with a rainbow of emotions."

Please take a moment to watch the total wonder and awe on young Kayla's face as she catches her baby sister with her dad standing behind her to make sure everyone is safe and comfortable.

It was an emotional moment for everyone involved, including Kayla who Splechta told HuffPost began to cry when her sister was born.

"Just as baby Everly’s head started crowning, and it was time to catch her baby sister, Kayla looked several times back and forth between her baby sister’s head and her mom’s powerful face ― at times with an inquisitive expression almost as if to ensure her mom was OK and other times in total amazement, as if she was thinking what a strong woman her mom was," the photographer told HuffPost, adding that "she let out a cry of joyful relief."

The raw emotion on Kayla's face, totally unguarded and natural and joyful, has resonated with thousands of people who have seen these photos. Perhaps because our world is changing and parents are becoming more comfortable with the idea of having their older children in the delivery room, as Parents recently reported.

Or, perhaps, it's simply a matter of recognizing love and support when we see it, as some social media users wrote on Facebook.

"Love her expressions! What a great experience for big sister!" one person commented.

Another wrote, "Wow, those pictures really show the emotion from that new big sister. Made me cry."

"So sweet and wonderful made me cry. What a beautiful time for the big sister and entire family. Great job!" yet another chimed in.

In an email, Splechta tells Romper that she has been blown away by all of the positive response to this powerful photo session. "The response to this birth story I captured has been overwhelming in such a positive way." She added that her work has reach over 2 million people and shared thousands of times in just a matter of days.

"Virtually every response was positive, emotional, happy, overjoyed," Splechta tells Romper. "I think it is rare to see a child catching the baby that is being born, and big sister Kayla's emotional reactions to meeting her baby sister Everly were so real and breathtaking, she wasn't thinking of hiding her reaction, she was completely real and unguarded in experiencing this amazing moment."

For the rest of Kayla's life, she will remember the day she saw her sister being born. As wonderful as it was for the rest of us to have the opportunity to watch this birth unfold, at the end of the day this is what matters. And it's a beautiful thing.