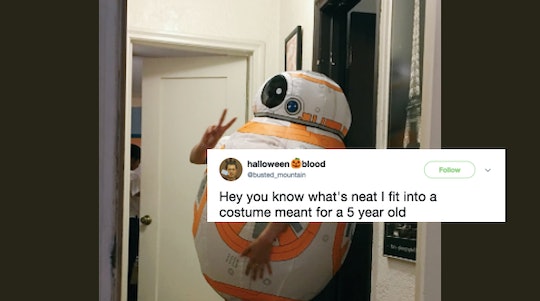 As a parent, I'm willing to go on record and admit that I have suffered frequent bouts of costume envy. My sons always seem to have so many fun options that have nothing to do with looking sexy and/or ironic (both of which appear to be the two caveats for women's Halloween costumes). I have been especially jealous of all things Star Wars-related. So when I saw these photos of a grown woman wearing a 5-year-old's BB-8 costume, I was impressed. Well played, madam. Well played, indeed.

For those who aren't obsessed with the new Star Wars movie, BB-8 is the droid who steals the show as the sidekick of fighter pilot Poe. A little skittish and rather reminiscent of R2-D2, BB-8 holds a clue about the location of Jedi Master Luke Skywalker, according to Star Wars.com, who appeared to have gone walkabout in the aftermath of defeating the Empire in Return of the Jedi. BB-8 became an instant cult classic after being featured in Star Wars: The Force Awakens last December. BB-8 Halloween costumes were a hit last October, and will most likely be a hit again this year as fans wait for Star Wars: The Last Jedi to hit theaters this winter. While there will surely be many children rolling through their neighborhoods as tiny BB-8's, this woman wearing a 5-year-old's BB-8 costume has already won Halloween, so nobody else should bother trying.

A woman who goes by the Twitter handle @busted_mountain was apparently pleased to find an inflatable BB-8 costumed that fit her. Well, it sort of fit her. I think the high heels and peace sign totally pull the look together myself.

Fellow fan folk were loving her unique take on the BB-8 children's costume as well. Her pictures have been retweeted more than 11,000 times and racked up a full 32,000 likes.

A few people even paid tribute to her look in the most flattering way: through imitation.

If her BB-8 costume, complete with heels, reminded you of a certain delicious candy cartoon, don't worry. You aren't the only one.

If wearing an inflatable BB-8 children's costume isn't your thing, have no fear. There seem to be plenty of amazing costume ideas out there this year, especially if you happen to be a Star Wars fan. There's the classic Princess Leia costume, which would resonate especially well this year as an homage to the woman who played her, Carrie Fisher. While you could go for the sexy Leia slave girl costume, I think dressing as General Leia Organa from Star Wars: The Force Awakens would be the way to go. Plus, I have a feeling Fisher (who died of a sudden heart attack last December) would have preferred this look.

Not a Star Wars fan but still want to unleash your inner Force? I mean, Wonder Woman (or indeed, any of the other Amazons living in blissful harmony) is obviously going to be a fan favorite at any Halloween shindig. Although to be fair, the costume isn't quite as straightforward as throwing on an inflatable children's costume and calling it a day.

However you decide to outfit yourself for the Halloween festivities, I think the trick is to have a little fun with it. Maybe don't worry so much about being topical or unique or whatever. Find a costume that brings you actual joy, that awakens in you a memory of what it felt like to be a kid and really just love dressing up. Whether that's a Ghostbuster, a witch from Harry Potter, or a BB-8 costume, whatever floats your boat. Because kids don't get to have all the fun, all the time, right?