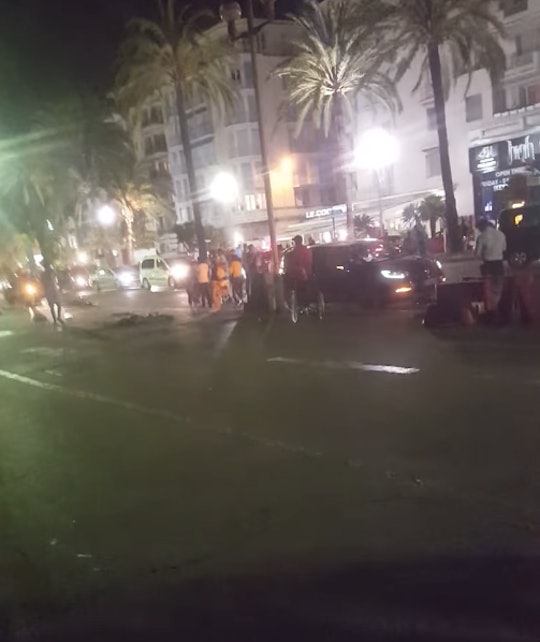 These Photos Of The Scene In Nice Are Devastating

More horrifying news, this time out of the idyllic seaside city of Nice in the south of France. As locals and holiday revelers gathered to watch the fireworks in honor of Bastille Day, a national holiday in France, a truck drove straight into the crowd of people. Multiple news outlets have reported at least 60 people dead, and police are investigating the crash as a potential attack. Already, photos of the scene in Nice are devastating, and show just how terrifying the situation really was.

As police and rescue crews continue to try to make sense of the scene, at least 30 people have been reported dead with many more injured, according to French TV channel BFM TV. While it has not been confirmed as of yet that this was a terrorist attack, local police officials have told residents to stay indoors as an extra precaution. A journalist for Nice-Matin, Damien Allemand, was on scene and described the white delivery truck (which was riddled with bullet holes) careening towards the crowd:

He was 5 meters from me. I ran towards a safe place at Le Cocodil. I went out after to see what happened. Nobody was moving anymore. In two minutes, the promenade became like a desert. ... I went to the scene and it was… I don’t have words. There was blood everywhere, a guy cut in half.

The photos tell the story of what should have been a night of celebration. A night where citizens and vacationers alike got together to show their love for France. Instead the beauty of that sentiment was polluted by a vicious attack, terrorist or not.

Scenes of people madly running away through the streets, struggling to find a place to hide, paint a terribly grim picture.

The mayor of Nice, Christian Estrosi, sent out a tweet saying the white delivery van "seems to have killed dozens of people." He has since placed the entire city on lockdown while investigations continue.

It has been almost eight months since the series of attacks by ISIS militants happened in Paris, claiming the lives of 130 people. Iranian journalist Maryam Violet, who happened to be visiting Nice for a summer holiday, told news outlet The Guardian that she saw many Muslim victims of the attack as well.

“There were so many Muslim people who were victims because I could see they had scarves over their head and some were speaking Arabic," she said. "One family lost a mother and in Arabic they were saying she’s a martyr."