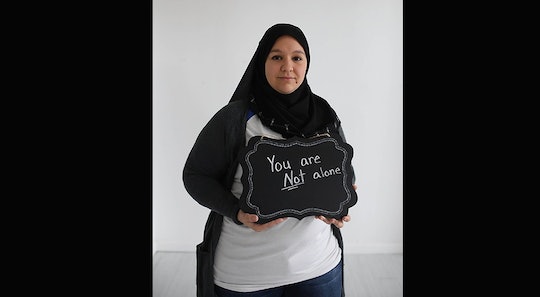 Photo Courtesy Of Portraits By Melanie

A friend of mine experienced a miscarriage about six months ago, leaving her emotionally wrecked. And as someone who loves her, all I wanted to do was help her. Make her feel better. But this, as any person who has experienced loss probably knows, is not always possible. Furthermore, it's not always our role to heal someone else's loss, and when a person tries to help their grieving friend heal, it can sometimes sound awfully dismissive or unkind, even when that's not their intention. Which is why this photo shoot depicting what you should and shouldn't say to a mom who experienced loss is incredibly powerful. Not only is it informative, but it's a potentially useful tool for all of the friends with good intentions who can't always find the right words.

Melanie Patarek, a photographer from Atkins, Arkansas, recently brought together a group of mothers who had experienced the loss of a child, whether that was through miscarriage or the loss of an infant. The women in the photos held chalkboards with quotes from things people had said to them in the past. Some of them helpful, and some of them (unintentionally or otherwise) less than helpful. As Patarek, whose company name is Portraits by Melanie, explained in her Facebook post: "Photos in black and white represent not so positive words spoken. Photos in color represent things said that kept us going and some people shared their rainbow babies birth date. It was important for us to promote positive discussion as well, because we would love for the not so positive to diminish."

There were several examples of things a mother does not want to hear after suffering a miscarriage that these women shared, words like, "At least you didn't have to get to know her and then lose her," and the comment shared in the photo above, "She's in a better place." Which had that heartbroken mom wondering if she was just not good enough, a sentiment I seriously doubt the person commenting intended to convey. It seems other moms who've suffered miscarriages heard the same comments and had a similar reaction, with one social media user commenting on Facebook:

This one was SO hard for me to hear also. No, the better place was with us! I am so sorry...I know it was meant out of love and kindness...but it made me furious inside.

Although it is certainly helpful to understand that your words can wound a woman after a miscarriage despite your best intentions, it's also helpful to be have some guidance. And these women were generous enough to share words that helped them heal, some of which were as simple as, "I'm here for you" and "It's not your fault."

This photo shoot has been shared more than 36,000 times since Patarek initially unveiled it at the end of August, and for good reason. Not only does it serve as a powerful reminder that easy clichés can cause lasting damage to a person who is suffering, it also offers tools to help these heartbroken mothers repair. Help them to know they're not alone, and that they're allowed to take as much space and time as they want to grieve. And isn't that the most important message of all?