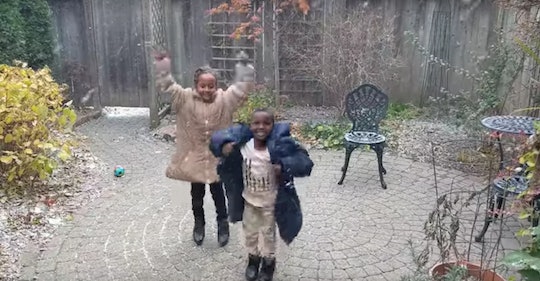 Today it snowed here in Canada. I had to dig into the back of my closet for my boots and my mittens and my winter coat which did not have any money in the pockets, I checked. It took me ages to get my car warmed up and uncovered. I hated all of it. I've lived here so long I forgot to see the beauty in snow. Which is why I'm so glad I saw these refugee children reacting to seeing snow for the first time ever. Because now I remember, it is pretty magical.

A woman in Toronto, Ontario shared a short video from the province's first snowfall earlier this week that has captivated Twitter. The video shows two young children from the east African country of Eritrea who have recently found refugee status in Canada with their mother and two siblings, according to CNN.

It seems the children have never actually seen snow in real life before, and they really couldn't get enough of it. Perhaps especially since they are so newly arrived to the country; the entire family of five reportedly arrived in Toronto after having spent time in Sudan in a refugee camp, as CNN reported.

As Rebecca Davies, the poster of the video, noted, the family only arrived at their new home one week ago. And this is how they felt about Canada's famous snowy season.

Imagine what life must be like for those kids for a moment. They managed to escape the dangerous political climate of Eritrea. The family fled to Sudan and then flew to the safety of Canada, where everything must look so incredibly different. Probably a little frightening, if we're being honest. New culture, new food, new language to try to learn. It would be enough to stun any adult into silence, let alone a child.

These sweet little children pulled on their big, warm winter coats and headed out the back door to marvel at snow, something they've never seen before in their lives. Instead of being afraid, they danced and laughed and tried to catch snowflakes on their hands. Clearly their mother, who is raising four children under the age of 7, as Davies noted on Twitter, has done an incredible job of protecting something important. Her children, yes, but also their sense of wonder.

The video of these two children falling in love with snow for the first time has been watched more than 3.1 million times. Because there's something so beautiful about the fact the joy these children share.

Not only has Twitter been gushing over these sweet kids, the Prime Minister of Canada Justin Trudeau himself couldn't help sharing the love for these new little Canadians. He retweeted the video with the hashtag #NewcomersWelcome and the caption:

Amazing - now convince them that shoveling is fun and you're all set. Thank you for everything you do, Rebecca.

At the end of the day, this video is about more than two kids enjoying their first snowfall. It's about kindness, and hope, and empathy. It's about welcoming people to your country unreservedly.

Because we're all human. Because it's the right thing to do. And because maybe you'll learn something from them... like remembering how to find the magic in snow.