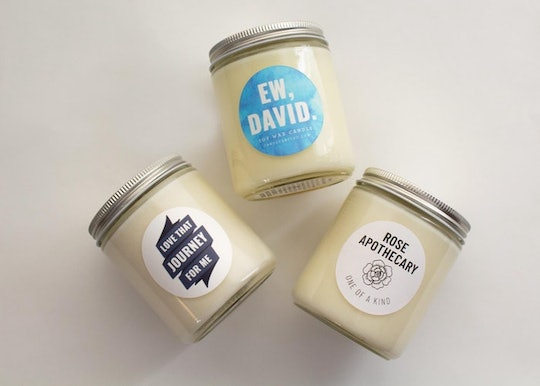 Now You Can Smell "Ew, David" All Day Long With These 'Schitt's Creek' Candles

Ew, David. It's a testament to actress Annie Murphy's comedic chops that she's able to make this very simple utterance so hilarious. Every time her character Alexis tosses out an "Ew, David," fans of Schitt's Creek rejoice. And now these diehard lovers of the Rose family have further reason to celebrate, for the Etsy gods have now sent unto them these handmade scented Schitt's Creek candles.

These little beauties are the clever brainchild of the CandECraftCo shop. Made from locally sourced soy wax, the candles each bear a different slogan from the show. "Ew, David" is Hawaiian Paradise scented, which — according to the shop — smells like "energetic mandarins, clementines, crisp lemons, limes, tropical fruits and exotic greens." The "Love That Journey For Me" candle smells of sandalwood, while the candle reading "Rose Apothecary - One of a Kind" will fill the air with the sweet scent of vanilla, lavender, and just a "hint of musk."

If you're a fan of this much beloved (and critically acclaimed) comedy about a family of selfish, entitled, lovable idiots, then no doubt you've already put these candles in your cart. If you're perhaps a little less selfish than the Roses, these could also be a great gift for a fellow Schitt's fan, especially considering the show will sadly be coming to an end this April. (sob)

But if candles aren't your thing? Well, then perhaps you'd be interested in this "Fold in the cheese" charcuterie board? Or this door mat? Or this pencil set imploring someone to "Eat Glass"? Or an Herb Irvllinger tote?

Or, if you're really hardcore, why not just go for it and get an "Ew, David" license plate?

After six seasons, Schitt's Creek has garnered the kind of obsessive fandom usually reserved for the likes of superhero flicks or major network shows. Which, on the face of it, might seem a little funny for a show with such a modest, simple premise. But like all great comedies, it isn't just that it's funny, it's also incredibly warm and touching, and even at its goofiest and weirdest, is ultimately about the bonds of family.

So yeah. It's a huge bummer that it's ending. Actually, now that I think of it, why not just buy all of the candles — every single one — and light them all up the evening of the finale? Then once the credits roll and you're sobbing, you can kick them over and set the house ablaze, then shout back to whomever you're with: "You get murdered first!"