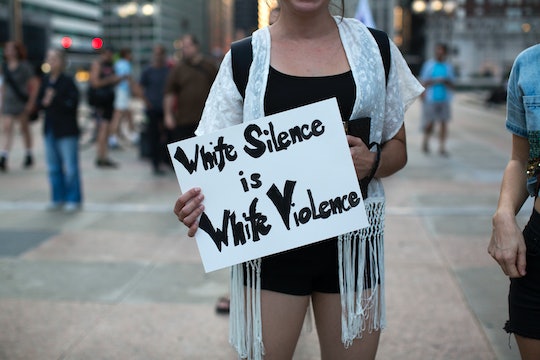 These States Still Have Confederate Monuments, & That's A Big Problem

The protests and violence that occurred in Charlottesville, Virginia, over the weekend were yet another painful reminder that racism and support for white supremacy is absolutely alive and well in America in 2017, and unsurprisingly, it has reignited some incredibly important conversations about discrimination, social justice, and political leadership. But it's also brought another important issue to the forefront once again: the problem with Confederate monuments. That's because the Charlottesville protesters gathered, in part, to fight the planned removal of a statue of Robert E. Lee — a Civil War monument that essentially commemorates the country's history of African-American oppression. Yet it's far from being an issue unique to Charlottesville: these states still have Confederate monuments, and it might surprise you to know just how many of them still remain.

A popular argument among Confederate monument supporters is that the statues have historical and cultural value — and in a post-Charlottesville statement, even President Donald Trump claimed that taking down the monuments would be an attempt to “[change] history,” according to The New York Times. But the fact that they're historical doesn't even sort of change the shameful legacy they represent, and while a number of Confederate monuments have been removed, it's estimated that more than 700 still remain according to USA Today — although that number could actually be much higher.

The encouraging news at least is that the Charlottesville protests have pushed officials in a number of cities to finally decide to actually remove their Confederate monuments. According to CNN, after two years of debate, a Confederate statue in Gainesville, Florida, was removed Monday from outside a county administration building, and early Wednesday morning, four Confederate monuments in Baltimore were also removed following a unanimous vote by Baltimore City Council Monday night, according to The Huffington Post. And there will likely be more to come: city officials in several other cities (including Memphis, Tennessee; Lexington, Kentucky; Jacksonville, Florida; and Washington, D.C.) are considering removing their Confederate monuments as well.

The not-so-encouraging news though? Even if all of those cities follow through, it'll still just barely make a dent. According to a report by the Southern Poverty Law Center, in addition to the hundreds of actual monuments, there are still thousands of other public Confederate symbols across the country, including public schools and military bases named after Confederates. And a number of states also still recognize Confederate public holidays.

What's more is that a number of these so-called historical monuments aren't even particularly old: according to The Washington Post, North Carolina has actually added additional monuments since 2000, with one in Mitchell County erected as recently as 2011, according to USA Today.

So where exactly are these monuments located? According to USA Today, 31 states are thought to still have Confederate monuments, with most — but not all — located in the South. According to the Southern Poverty Law Center, Virginia has the highest number of monuments (more than 200), while Texas, Georgia, North Carolina, Mississippi, South Carolina, and Alabama are all estimated to have more than 100 each. Rounding out the top 10 are Louisiana, Tennessee, and Florida, but they're definitely not unique to former Confederate states. According to USA Today, even Union states, like Massachusetts, Iowa, and Pennsylvania, still have Confederate monuments, as well as states that weren't even actual states in 1861, like Montana, Arizona, and Oklahoma. And according to CNN, both Arizona and Pennsylvania have said they currently have no plans to actually remove any of them, despite the Charlottesville protests.

Of course, if there's one thing that Charlottesville has made abundantly clear, it's that even if all the Confederate monuments were removed tomorrow, it wouldn't even sort of solve the systemic racism at the heart of the debate — nor would it eradicate the so-called "alt-right" movement that seems to be becoming increasingly more comfortable with proudly expressing their discriminatory views for everyone to hear and see. Yet the fact that these monuments continue to exist and be supported in public spaces in light of the extremely painful past they represent to so many Americans means that taking them down is still important, and that it would send a crucial message that is way overdue.