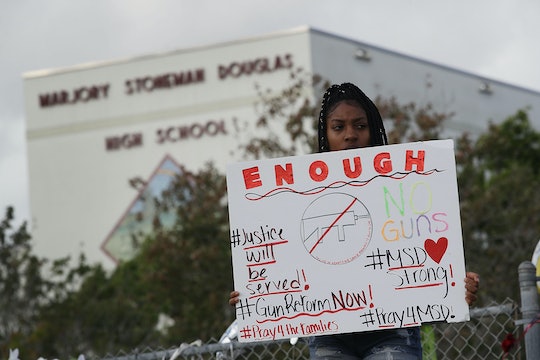 Last week, a gunman opened fire at a high school in Parkland, Florida, killing at least 17 people and injuring dozens of others, according to police officials. The fatal mass shooting at Marjory Stoneman Douglas High School has left parents, students, and the Parkland community not only heartbroken, but outraged. In the wake of the deadly attack, survivors have decided enough is enough, and are demanding action on gun violence prevention. And these student walk-out photos from across the country prove that these teens are powerful, and will ignite change.

On Wednesday, thousands of youth nationwide left class in a show of solidarity with the survivors and victims of the Parkland shooting, according to The Daily Beast. Students from Florida, Chicago, Ohio, Maryland, Phoenix, Cincinnati, Minneapolis, and other cities all staged rallies in an effort to spur lawmakers into action in passing laws that ban assault weapons, like the one used in the bloody incident at Stoneman Douglas High School and other mass school shootings through the years, The Daily Beast reported. Hundreds of teens from the Washington, D.C. area also walked out of school Wednesday morning and met at Union Station, where they began their march to the Capitol, according to Bethesda Magazine.

Daniel Gelillo, a senior at Richard Montgomery High School in Rockville, Maryland, organized the massive walkout in Washington, D.C., calling the rally "Enough Is Enough," according to Bethesda Magazine. In a statement posted to Facebook, Gelillo wrote,

All people in this country, particularly children, should feel safe and should not live in fear of a gunman killing them in their school, place of worship, or a nightclub. We expect our leaders to do whatever is required to keep us safe. That has not happened.

Gelillo told Bethesda Magazine on Tuesday that he felt a need to take action after watching Parkland survivors come together after the shooting to organize in the name of progress. The Richard Montgomery senior said,

There have been countless horrific shootings, but I think that this one in particular, because of the videos and the students that spoke out afterward, … it really inspired us to take some real, substantive action to try to get some things to change.

On March 24, teens survivors will head to Washington, D.C. for "March For Our Lives," a rally on the Capitol that demands "their lives and safety become a priority and that we end this epidemic of mass school shootings," according to the march's website.

Another wide-scale school walk-out is planned for March 14, a month to the day of the mass shooting at Marjory Stoneman Douglas High School. The nationwide wide rally has been organized by the Women's March Youth EMPOWER group, and calls for students, faculty, school staff, families, and community members to leave school for 17 minutes at 10 a.m., according to the walk-out's Facebook event page.

We are not safe at school. We are not safe in our cities and towns. Congress must take meaningful action to keep us safe and pass federal gun reform legislation that address the public health crisis of gun violence. We want Congress to pay attention and take note: many of us will vote this November and many others will join in 2020.

The old adage goes that the children are our future—and Wednesday's walk-out proves that true. The teen survivors of the deadly Parkland mass shooting (and their young allies) are taking charge where adults are failing, even in the midst of being called "crisis actors" by disgraced Fox News pundit Bill O'Reilly and pro-gun alt-right trolls. The teens are powerful beyond measure.