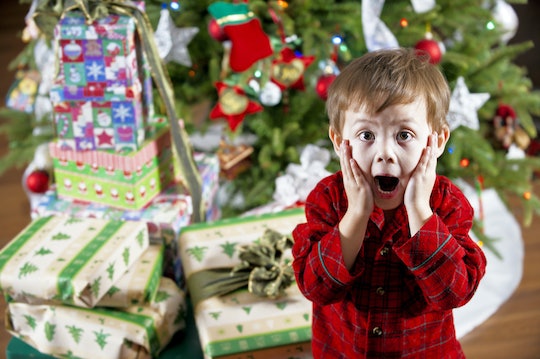 The holiday season is the season of giving, and there are so many reasons worth celebrating beyond the presents. There is the colder weather and delicious holiday drinks and foods that make the season so special. But there is a downside to the holiday season that everyone knows about — they can be expensive. And these four studies about how much the holidays cost parents show that the holidays really don't come cheap.

When you were a kid — if your family believed in Santa — you were led to believe that a magical man flies down to your home every year to deliver you presents from the North Pole. But the older you got, reality set in and came to acknowledge that your parents were the ones in charge of purchasing the presents — not Santa or some elves — and those presents (and their costs) quickly added up. And for those who are parents now, well, you know exactly how costly this season can be.

While every parent wishes Santa existed to take care of the presents and their credit card bills each holiday season, the reality is, parents do have to dip into their own wallets. And as it turns out, they end up spending a lot. Indeed, the season of giving can really add up.

These studies can provide insight as to how much money parents are spending, where they're putting their money, and one thing they can do to save better for next year.

They Are Spending Quite A Bit On Their Kids

A survey conducted in November by Lending Tree found that the average holiday budget for parents of all ages on presents in 2017 was $943 total. When it comes to their children, however, 80 percent of parents surveyed admitted to plan on spending over $100 for each kid. Only 30 percent admitted to planning on spending at least $250 on each kid. A survey conducted by RetailMeNot in October found that parents planned on spending $330 total for their children in 2017.

This year, according to a holiday survey conducted by Deloitte, 25 percent of holiday shopping went to purchasing clothing, 18 percent of spending went to toys, and 16 percent went to electronics and games. All of those presents really do add up, especially when they're not coming from the North Pole.

Aside from leaving your wallet emptier, spending does have some other downsides. Last year, T. Rowe Price found that holiday shopping can have a negative effect on some families, specifically that a majority of parents go over their budgets and go through lengths to get everything off of their kids budgets. As a result, the survey found that a quarter of parents surveyed dipped into "personal finance funds" like their retirement funds, just to pay off those credit cards.

They Spend How Much Each Year???

Although spending projections for this year might be a little too early to tell, spending statistics from 2016 can give people a clearer look as to how much parents are spending this holiday season. And according to projections made by Deloitte, sales are expected to grow from last year due to the retail environment thriving, according to CNBC. Millennial parents in particular are spending just as much as previous generations, if not more, according to NBC, driving the "holiday sales gain."

A survey conducted in 2016 by the Rubicon Project, found that parents planned on spending an average of more than $1,700, according to Forbes — but this number is not exclusive to parents. If you think that is bonkers, the study found that people who have kids will spend over $700 more than people without kids.

But it is very important to note that this number changes year after year. For example, in 2014, according to TODAY, the National Retail Federation predicted that families would spend $596.53 on holiday gifts. That is a huge difference over the span of three years.

It's Not Just About Shopping For Presents, Either

While it might be easy to assume that parents will spend a lot of money on their children, family members, and friends, there are the extra, hidden costs that people might forget about. Spending money on things like decorations and gift wrap during the holiday season adds to the running cost of the season.

A survey conducted by the National Retail Federation in September, according to TIME, found that consumers said they planned to spend the most during the winter holidays. The survey found that consumers are spending an average of $115 for food and candy and $78 on decorations a year for the holidays in 2017. A 2014 report conducted by U.S. News & World Report found that Americans, in total, spent approximately $3.2 billion on wrapping paper, holiday cards, and gift bags.

But, Those Who Shop Online Are Able To Stick To Their Budgets

Although people get such a thrill by shopping in the aisles of Target, when it comes to saving money, shopping online could be the key to success. A survey conducted by T. Rowe Price earlier this year found that parents who reported themselves going over their budget (58 percent of them) almost shopped exclusively in stores. But the parents who stuck to the budgets they set out for themselves earlier in the year (72 percent of parents make budgets, according to the study), were more likely to shop online.

When you put things in your cart in real life, you tend to not view it as a running total. But when you're adding things to your cart online and are reminded of the total every time you add something into your online shopping cart.

For parents, it is almost impossible not to spend hundreds of dollars during the holidays. When it comes to holiday spending, keeping track of how much you spend per child and sticking to a *firm* budget can help parents avoid overspending this holiday season and feel more at ease about all gifts under your Christmas tree.