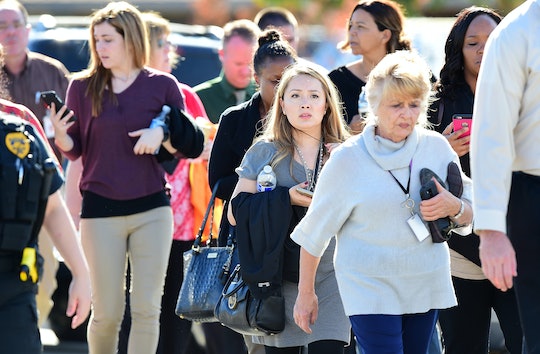 These Survivor Accounts Of The San Bernadino Shooting Will Terrify You

Wednesday probably started out as an ordinary day at the office for county health workers at Inland Regional Center, a developmental disabilities community health facility in San Bernadino, Ca. In fact, the small staff was in the middle of an office holiday party on Wednesday morning when the unthinkable happened: Two masked shooters broke into the center and went into a rampage, brutally killing more than a dozen employees. The survivor accounts of the San Bernadino shootings paint a scene of terror and chaos in the minutes that followed.

Denise Petraza, a county environmental health specialist, told the Los Angeles Times that the gunmen were dressed head to toe in black tactical gear, wore black masks, and that each were carrying multiple pistols and long guns. Petraza told the Times that “everyone dropped to the floor” when the shooting started. “The guys opened fired for 30 seconds, randomly, then paused to reload and began firing again.” She told relatives that she tried to avoid the bullets by hiding under a desk. Petraza was shot in the lower back, but is expected to recover, according to the Times.

Petraza said that she and her fellow co-workers managed to lay still and silent for least five minutes before police officers entered the room.

Another shooting survivor was at the center for a work luncheon when the gunfire began. Her parents told ABC News that she said the gunmen never said a word before opening fire at people inside the facility. That woman sustained multiple gunshot wounds and is being treated at Loma Linda University Medical Center, ABC News reported Wednesday night.

Some were unsure what to make of the firing sounds in the office building, thinking perhaps the descending police and SWAT teams were running an active shooter drill or testing evacuation protocols. The center had undergone an active shooter drill just one week prior, according to another Times article. “Drill started,” nurse Dorothy Vong texted her husband at 11 am. Minutes later, reality set in and she texted him again: “Well it’s real” followed by “we’re in a locked office”

Others immediately searched for places to hide, texting loved ones to let them know they were safe. “Dad shooting at my work, shot people in office,” a worker named Holly texted her father, according to the Daily Mail. “Waiting for cops to catch him. Pray for us. [...] we are locked in an office. Cops SWAT helicopter, everything here.”

Shortly after, the police arrived to secure the scene and help get people to treatment — and also to help calm people who, by then, would have been in terror for their lives. A video surfaced early Thursday morning that showed a police officer escorting people through the building and assuring them that the danger was over. His words to the survivors, “Relax. I’ll take the bullet before you do. That’s for damn sure.”

All told, at least 14 people were killed in the attacks at Inland Regional Center, and more than a dozen more were sent to local hospitals with a range of serious injuries. Authorities later identified the gunmen as Syed Farook and Tashfeen Malik, a husband and wife with no prior record of violence or history of police involvement. The suspects were killed in a gunfight with police on Wednesday night. Authorities are still investigating their possible motives.