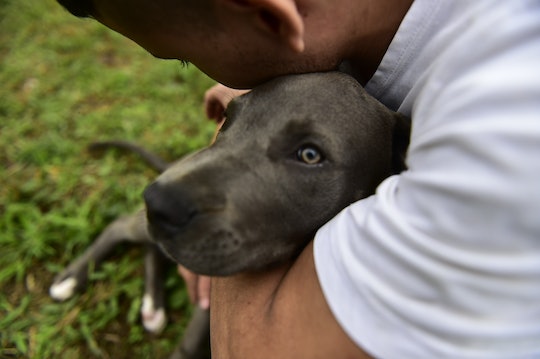 Dog owners are keenly aware of the healing power of their pets. Dogs are such instinctive beings, so full of empathy and light. They seem to be able to feel a person's trauma in ways that no human can understand, and right no that uncanny ability is being put to extremely good use. These therapy dogs were flown in to comfort Las Vegas shooting victims in the wake of Sunday's disaster.

As the world now knows, last Sunday a lone gunman opened fire on a crowd of 22,000 revelers at the Route 91 Harvest Festival in Las Vegas. Within 10 minutes, the gunman had killed 58 people and wounded 527 more. It was the worst mass shooting in modern American history, and the victims remain traumatized. Enter the LLC K9 comfort dogs from the Lutheran Church Charities in Illinois. A group of 17 specially-trained comfort dogs were deployed to Las Vegas on Thursday. Since arriving, the dogs have been travelling throughout the area to comfort victims. They have attended candlelight vigils for those who did not survive, stood by as people gave blood at donor clinics, and mostly given solace to overly-taxed support workers and injured victims at the Sunrise Hospital and Medical Center.

Sunrise Hospital director of guest services Tracy Szymanski told Today that seeing the dogs at the hospital was an immense relief in the aftermath of the mass shooting.

I came straight to the hospital from the venue at 10:30 at night, still wearing my concert clothes, because I knew there were things I could do to help the families. It was a sigh of relief when the first dogs arrived Monday morning, because I knew the cavalry had arrived. I felt I had help at a time when I felt helpless.

The comfort dogs also visited the Clark County Coroner's office, where the staff "really needed some love and compassion," according to the LCC K9 comfort dogs Facebook page. One of the comfort dogs, Nicodemus, "reported" on Facebook:

Some may not realize how many people actually work at the coroner’s office. After this week, they all REALLY needed some love and compassion! The forensic tech was amazed at how big my paws are. We got to hang out for a long time.

The dogs were flown in from all over the country by the Illinois-based non-profit group, and for some it was a very long trip. But that didn't stop them from getting down to the business of helping those in need. Whether they were visiting the staff members of Mandalay Bay Hotel (where the gunman shot the victims from his 32nd floor hotel room), gone in to area schools, or spent time with family members who lost loved ones, the dogs have been spreading their love wherever they could.

LCC president Tim Hetzner told The Dodo in an interview:

"Everyone wants to pet the dogs. Some people just want to lay on the ground with them and talk. The dogs are like a bridge for people to talk about what's bothering them. The dogs are confidential, they're good listeners and they're nonjudgmental. And talking about things is one of the most important ways to heal.

There are several well-proven mental health benefits to be gained from pet therapy, according to Paws for People. Comfort dogs have been known to:

Their comfort and support was needed rather desperately in Las Vegas this week. Hopefully it will not be needed on that level ever again.