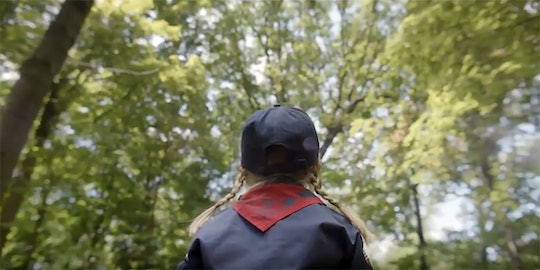 The Boy Scouts of America sparked a national debate in October 2017 after announcing its plan to integrate girls into the organization. Although the Girl Scouts' president argued at the time that the move was to help with the organization's declining membership, according to BuzzFeed News, others championed the change for the opportunities it promised to provide countless young girls. And if you're still on the fence about the BSA's decision, you should check out the stories of these trailblazing girls who've joined the Cub Scouts as a part of the organization's Early Adopter Program.

The BSA is undergoing a period of intense change. Following the announcement about girls joining the organization, in May it unveiled a name change for its older youth program. Effective February 2019, the older youth program will go by "Scouts BSA" to reflect its evolving demographic, a press release revealed. BSA marketed the historic shift with a new slogan, "Scout Me In."

"As we enter a new era for our organization, it is important that all youth can see themselves in Scouting in every way possible," Boy Scouts of America chief executive Michael Surbaugh said in a May statement. "That is why it is important that the name for our Scouting program for older youth remain consistent with the single name approach used for the Cub Scouts."

Of course, the name change didn't sit well with some critics. Many conservative commentators, for instance, claimed that the modification represents an erasure of male spaces and so-called tradition.

"Boys are not allowed to have any of their own spaces in this ridiculous culture we've made for ourselves," right-wing writer Matt Walsh tweeted.

"It is a national disgrace that girls are being allowed into the Boy Scouts," Turning Point USA founder Charlie Kirk wrote.

But the girls who've since joined Cub Scouts — over 55,000 recruits as of October — would probably disagree with these divisive talking points. From the outdoor activities to the opportunity to make Eagle Scout, girls in Scouting are raving about their experiences in Cub Scouts, BSA's junior program for kids in the 7 to 10 age range.

Michaela, a 10-year-old girl and current member of both Cub Scouts and Girl Scouts, tells Romper in an interview that she first became interested in Cub Scouts after watching her two older brothers — both Eagle Scouts — enjoying activities like "camping, climbing, and swimming."

Another aspect of Cub Scouts Michaela appreciates? She argues Boy Scouts is a lot more "independent" and "outdoorsy" than Girl Scouts.

MaKayla, a 10-year-old girl who left Girl Scouts a few years ago, said she joined Cub Scouts for similar reasons. "I decided to join Cub Scouts because I enjoy being outside and learning different skills like fire starting and compass," she explains to Romper.

Additionally, MaKayla is thrilled that she gets to spend time with her entire family through the program. "I really like camping with my dad. And then we had family camp last weekend," she tells Romper. "Me and my dad my planned all of our meals together, and I really enjoyed that."

For Michaela, she can't get enough of the hands-on activities and opportunities to volunteer. She shares with Romper:

I really enjoyed overnight camp, especially because I’m a top shot in BB gun and a top shot in archery. I also really enjoyed the campfire program. Another thing I like is doing community service projects. Like right now I’m collecting uniform shirts for scouts in need, and I was collecting food for families in need. And last year I did a Big Toys For Tots mission.

Both girls look forward to earning the title of Eagle Scout one day, a coveted honor once held by Neil Armstrong and President Gerald Ford, to name a few.

"I want to be one of the first girls to earn an Eagle Scout title. And when I earn my Eagle, it will help me in a lot of ways. My brother actually got a full scholarship and he had a rank up in the military because of the things he learned becoming an Eagle Scout," Michaela tells Romper. "It’s also good for a leadership job because it shows that you’re a good leader and a good member of your community."

As for girls who might be hesitant to join the program, MaKayla has these words of advice: "I’d say keep going because it’s a lot of fun. You get to learn a bunch of different skills that you can use."

Michaela shared a similar sentiment, telling Romper: "I would probably tell them that they should try it out to see if they like it, because there are lots of fun things to do. You can do shooting, swimming, camping, bouldering … it’s just super fun."

Cub Scout dens are single-gender, while Cub Scout packs "can include any combination of all-boy or all-girl dens," the BSA states. The organization reasons that this "model builds on the benefit of a single-gender program while also providing character and leadership opportunities for both boys and girls."

Both Michaela and MaKayla tell Romper they've enjoyed collaborating with male scouts, and they've had positive experiences with their mentors.

As for Girl Scouts? The organization has adopted many programs that are arguably important to a young girl's development, like it's emphasis on science, technology, engineering, and mathematics (STEM) curriculum. Girls enrolled in the org participate in STEM-based activities, like building their own robots and race cars, for instance. And similarly to Cub Scouts, Girl Scouts is always evolving to meet the needs of its recruits.

Although Cub Scouts might not be for every girl out there, it's hitting the mark for many new recruits. With the Eagle Scout title, countless girls are on the path to landing leadership positions that have been reserved for men, while thousands of new recruits — like Michaela and MaKayla — now have the opportunity to enjoy activities that were once out of their reach.