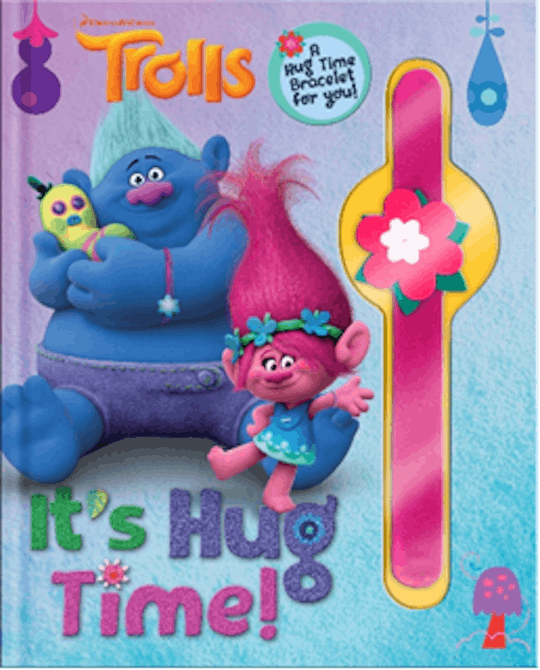 Recall Alert: These 'Trolls' Slap Bracelets Have Been Recalled For A Laceration Risk

It's time to have a look through your kid's toy box/book shelf to make sure they're safe, parents. The United States Consumer Products Safety has announced a voluntary recall, and this time it looks as though a few children have been injured as a result of the faulty product. Slap bracelets sold with Trolls books have been recalled due to a possible laceration hazard, and parents are being urged to take these bracelets away from their children immediately.

Studio Fun, which sold the books, did not immediately respond to Romper's request for comment.

The bracelets were given out as an accessory to the popular Dreamworks Trolls storybook, It's Hug Time! The United States Consumer Products Safety Commission announced that the metal band under the fabric could wear through the fabric and cut children's hands and fingers. The books and accompanying bracelets were sold by Studio Fun International in New York. The CPSA noted that five children have already reported injuries from wearing these bracelets, and warned that use of the toy should be discontinued immediately, according to Good Housekeeping. There were approximately 79,000 units distributed between September 2016 and August 2017, through school book fairs, clubs, and at online retailers like Amazon.com, BarnesandNoble.com, and walmart.com, according to the recall announcement by the CPSC. There were also approximately 7,000 slap bracelets sold in Canada, which are also included in the recall.

To find out whether your child has the recalled book and slap bracelet, check the ISBN number for the book. It is 978-0-7944-3840-1 and is printed on the back of the book.

The CPSc recommends that customers contact Studio Fun International directly for instructions on how to get rid of the bracelets. The company has decided to issue a replacement book to all customers who purchased the Trolls book with the slap bracelets.

Slap bracelets were invented back in 1983 by a teacher in Wisconsin, Stuart Anders, according to The New York Times. The original slap bracelets, which were called "slap wraps," were made of a long piece of pliable steel (much like actual measuring tape) covered in fabric. They grew in popularity throughout the late '80s and early '90s, and were especially popular with the tweens of that generation. Unfortunately, several children were injured for exactly the same reason the Trolls slap bracelets have been recalled: the fabric covering gave way to the steel band and cut little fingers. According to The New York Times, in 1990, a panel from the CPSA warned parents of the potential dangers of these bracelets.

Despite the potential dangers associated with slap bracelets, they seem to remain on the cusp of popularity with kids. There are even websites that offer tutorials on how to make your own slap bracelets. Not everyone understands the appeal, but kids most certainly do. And since there are around 79,000 of them out there... there could be a lot of unhappy kids and parents after this recall.

The recall for these slap bracelets, which sold for $13 with the accompanying book, was issued on Sept. 7. There have been no more incidents or injuries reported since that time. You can reach Studio Fun International at 800-489-3402 from 8 a.m. to 4:30 p.m. Central Time Monday through Friday, or online at www.studiofun.com and click on "Product Recall" for more information.