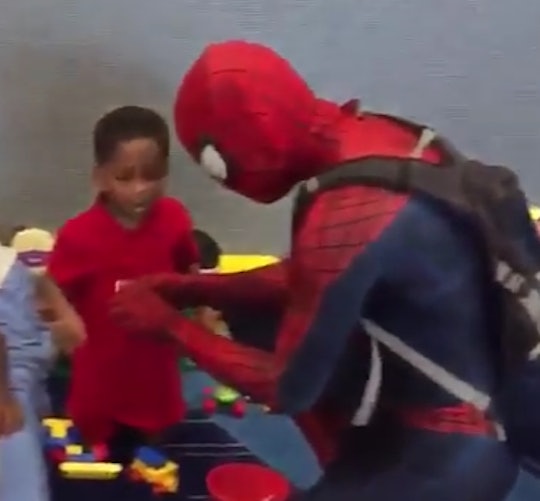 When a kid is suffering, there are really only a few people who can cheer them up. Their parents, maybe their grandparents, or a best friend. A pet, for sure. And oh yeah, obviously Spider-Man. Because if a surprise visit from one of the greatest superheroes of all time doesn't cheer you up, things have gotten really bad. And if these videos of Spider-Man cheering up kids after Hurricane Harvey are any indication of how things will eventually pan out, well, things might be looking up one of these days.

Your friendly neighborhood Spider-Man decided to drop in on some kids staying at George R. Brown Emergency Center, a local shelter in Houston, where over 9,000 people were taking refuge from Hurricane Harvey. The massive tropical storm has left at least 30 people dead as it makes it's slow, unrelenting progress along southeast Texas, according to The New York Times. Harvey has left thousands of people stranded by floodwaters in the Houston area alone, many of whom are children.

While the storm has clearly caused chaos for adults, it is always more frightening for children. To feel uprooted, displaced, uncertain, removed from their daily routine... it's too much for them. Which is why a visit from Spider-Man — replete with stickers and giving high-fives all around — was just what the doctor ordered.

And just in case that wasn't sweet enough to melt your heart, here's a follow-up.

There is obviously no downplaying the damage done by Hurricane Harvey. ABC News reported that an estimated 30,000 to 40,000 homes have been destroyed in the Houston area. Power outages have affected at least 75,000 homes. The people who were living there could remain stranded for the foreseeable future as relief efforts begin.

As Harris County Judge Ed Emmett noted, according to ABC News: "The biggest challenge is going to get people back in their homes. We've got to get those people back into their normal lives as soon as possible."

And as children wait, staying in crowded shelters with little to no privacy... at least they've got Spider-Man. Encouraging them to smile, to be brave, and to have fun.

For those of us who do not possess Spidey senses or the ability to swing from tall buildings with nothing but a web, there are things we can do to help the kids affected by Hurricane Harvey, too. For starters, you can see a full list of ways to donate to designated relief funds for victims of the storm here.

Because Spider-Man isn't the only one who can put a smile on a kid's face. He just has the best costume.