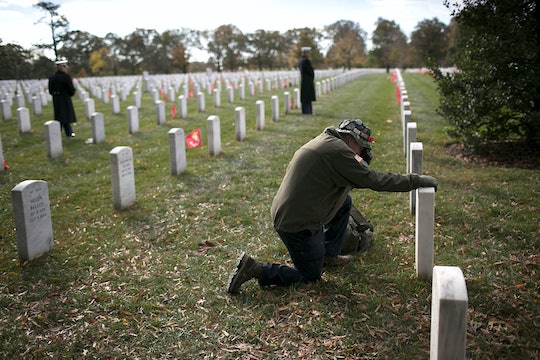 Veterans Day was on Saturday. As someone who has had family in service for most of my life, this is a day of reflection. A day to be thankful for the people still in my life, and thankful for those who gave their lives too soon so I could make the choices afforded to me today. Every year, I tend to get melancholy on Veterans Day, and intentionally seek out videos of soldiers coming home to surprise their families. Because the relief and happiness is such a beautiful thing to witness, it feels like a gift every time.

Americans have taken a pause on Nov. 11 to consider and observe veterans, both alive and gone, since the end of World War One almost 100 years ago. While it was initially called Armistice Day as a reflection of the last day of World War One, Congress officially changed the name to Veterans Day in 1938, according to VetDay. Since the very first official Veterans Day, American soldiers have fought in several wars. They have traveled overseas, to countries where they are often not welcome. They have left behind husbands and wives and children and parents. They've been afraid for their lives, but fought on regardless.

And then the lucky ones get to come on back home.

As difficult as it is for adults to say goodbye to service men and women, not knowing when (or if) they will see their loved one again, it's so much harder for children. To say goodbye to a parent and wonder about them... what they're doing, how they're doing, when they'll come back. It's incredibly difficult for a kid. The TNT channel put together a lovely compilation video of parents coming home from service to surprise their kids, and if you manage to get through the first video of a teenage boy sobbing when his dad, MSGT Joe Martel, who had just returned from Afghanistan, surprises him on the football field... I don't even know what to say.

Of course, soldiers have siblings who love them too.

When this U.S. Marine came home for his sister's college graduation ceremony, there wasn't a dry eye in the house.

Keeping the fires burning on the home front, as they say, is no easy feat. Especially when you are trying to reassure children and keep things running smoothly at home.

The thought of welcoming home your partner, seeing them safely standing in front of you, is what keeps you going. So you can understand these emotional reactions.

Coming Home To A Pet

This German Shepard was fetching a ball and came back to find his owner returned from service. His reaction... I can't even. Because let's face it, no one loves you like your dog loves you. Just like this dog, who can't take his eyes off his own returning soldier as he comes down the driveway.

As a mom, the thought of my kids in danger is awful. The sort of thing that wakes you up in the night, that keeps you from getting back to sleep. Parents of the estimated 20 million veterans living in the United States all know that terror better than most. So when their children come back from service, you can imagine their happiness. These two moms, whose sons were sweet enough to surprise them with a homecoming, are justifiably in tears. As am I.

This Veterans Day, take a pause. A moment to imagine not just the service men and women who take up the call to protect their country, but also the people they must leave behind. And the hours they count down until they can welcome them on home again.