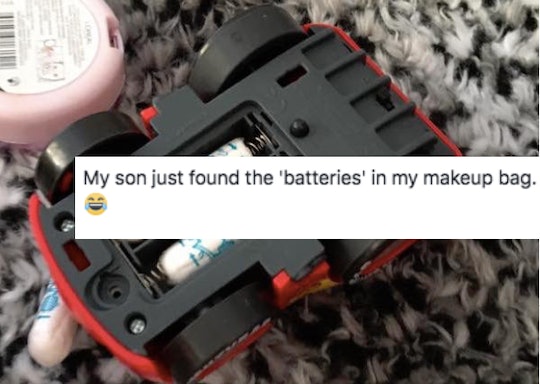 This 3-Year-Old Thought His Mom's Tampons Were Batteries & OMG

When a kid's toy breaks down or needs a change of battery, they'll usually take extreme measures to correct the problem. Like throw a tantrum in the middle of the kitchen, beg you over and over to "fix it," or go the unconventional route like this 3-year-old who used tampons as batteries for a toy truck. Oddly enough, the tampons actually fit. Maybe this is something scientists should look into.

Heather Leroux posted a picture of the toy on the Today show's Facebook page. She wrote that her toddler son, Leo, "My son just found the ‘batteries’ in my makeup bag." The savvy mom told The Sun that she was not about to put batteries in his McQueen car because she was scared that he would play with them or eat them. The back had been lost long ago, so the truck had to be played with manually.

Until Leo noticed that the car could have batteries. So he begged and begged her, but his Australian mom managed to fend off his request every time. But 3-year-olds don't just get distracted when it comes to a toy they love. Leo just knew that there was a better way. So he went to the makeup bag.

Leroux told The Sun, "While I was cooking, he took it upon himself to go through my gym bag, empty my make-up bag and play with my foundation."

All of a sudden, she heard him scream out. "Mummy, look I found the batteries.'" Hilarious. When she went into the room, she found Leo proudly holding the tampons. "I told him how clever he was, although they weren't going to make the car turn on," she added.

But at least the tampons meant that Leo wouldn't ask about the batteries any time soon. It was really a win-win solution. Along with Leo's tampon batteries, another adorable kid recently went viral for being a little confused about what a pad was used for. The 8-year-old girl was making a makeup tutorial when she was stumped by the contents of the makeup bag she was working with.

After applying blush and some lipstick, the young girl opens up the pad and inspects it long and hard. Then, like a true pro, she decides that it can definitely work as a blotter. Unlike Leo, whose decision to use tampons for batteries will never work. This 8-year-old girl's blotter of choice is actually pretty smart. Sure, it's a pantyliner, but in a pinch it could work, as so many comments on the original post point out.

Kids and feminine hygiene products — what will they think of next?