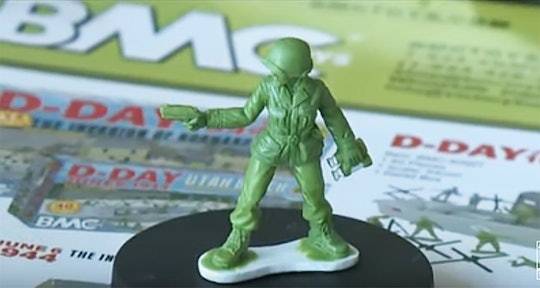 When I was a kid, I was what people at that time called a "tomboy." I liked playing with "boy" toys, I was often found outside playing in the dirt and waging war with the neighborhood kids, something that I guess was supposedly not very "girly." Now I think we call girls like me girls, period. Because finally the world is realizing that gender-specific designations for toys shouldn't really be a thing anymore, and it seems the road to a more egalitarian future is being led by the youngest among us. Case in point: This 6-year-old girl helped persuade a company to make green army women, that iconic toy that has never once represented women in uniform in its 80 years on the market. That, my friends, is power. And progress.

BMC Toys in Pennsylvania has been creating those bags of posed green army toys (the very ones represented in Disney's Toy Story franchise and voiced by men only, of course) since the '30s. For decades, children have been crowding together in groups on living room floors and in backyards to have pretend battles with each other. Now before you say it, I know not every parent loves the idea of their kids playing with army toys. But some kids want to play games based on the real-life heroes they see in the military, and this is exactly what lead 6-year-old Vivian Lord from Arkansas to write to BMC Toys recently, asking why the company wasn't making "girl army men."

Lord wrote in her letter that one of her friend's moms is in the army, and that's why she was hoping to see "girl army men" when she played with her toys, according to NPR. The little girl was especially emphatic that "girls are in the army too," and that the company should make green army men that looked like women. She even promised that she and her friends would "play with them every day" if the Pennsylvania company would just make them, according to The Military Times.

Ultimately, she got her wish. Jeff Imel, the president of BMC Toys, responded to Lord's letter with this simple message; "It's happening."

The company has already begun to design and sculpt Green Army Women toys that will come in four military poses to be released by Christmas 2020, according to The Hill. Not simply because of Lord's letter, but because Imel noted that many other women want the same thing, too. "What's been really surprising to me is how many women have contacted me since Vivian's story aired on national television to say they wish they had little Green Army Women when they were children back in the '60s," he said, according to TK.

Of course, this change is also important to military moms who want a toy to remind them of their mother's service, as noted in this tweet.

Vivian Lord was just one voice among many others who wanted to see some change, of course. The company was initially contacted back in 2018 by retired U.S. Navy fleet master chief Joann Ortloff, who wanted to find Green Army Women for her granddaughters, as per Mental Floss.

But there is powerful something about the words of a little girl, asking for something as simple as a "girl army man," that truly tipped the scales. It seemingly reminded a company that girls everywhere want to see themselves and the women they admire represented in their toys, no matter what the toy might be.