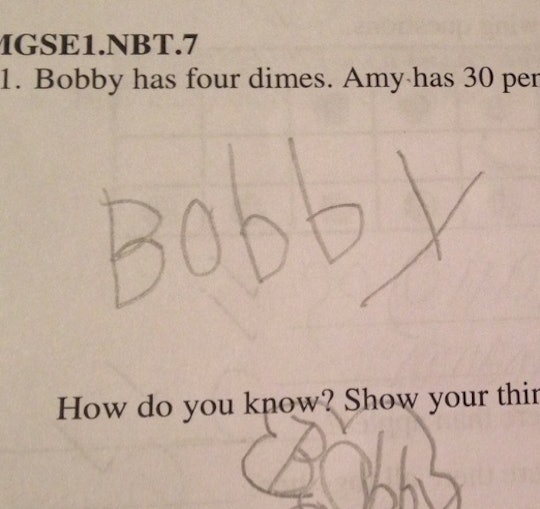 This 6-Year-Old Had The Best Answer For A Math Problem, & 6 Other Kids Who Are On Their Snark Game — PHOTOS

When you're a kid in school, you aren't privy to the luxuries of calculators or Google to give you an explanation for any reasoning you may come up with. Because that's the way school works: They test you on your ability to perform functions that we've already come up with ways to never have to do them in the real world. In fact, in elementary school, at the beginnings of learning the terror or math, you get to learn all kinds of weird ways to find your answer in the longest, most roundabout way possible. Like, you know, this new Common Core system that everyone is upset about, which I haven't even begun to understand (and really just gave up on because calculators).

Honestly, I don't think I even started really trying at math until college, when I needed those courses to get past those annoying required classes. So when Redditor irishchck14 posted a photo of her own kid's math prowess, I had to give props: In response to a question about how he found his answer (aka, the absolute worst question that all kids everywhere hate), he gave the most literal of reasons, thus racking up some serious cool points for his snark card. (All parents give their kids a snark card, right? To track their progress and growth in the all-important area of snark?)

As with all 6 year olds who have zero filter and won't shy away from asking why you're "so ugly" or why your hair is "so greasy," this one is no exception, except that he's using his powers for good instead of "making me feel bad about my dirty hair" evil. Way to go!

But I think we can agree that although kids seem to spit out unintended insults with more style and grace than adults, there is just something about their DGAF attitude that makes you admire them.

Well, to be fair, the kid does seem pretty smart. I mean, they got the other answers answered well enough. They may not have given the answer the teacher was looking for but can we at least agree that they're right on another level.

Without knowing the context of this assignment or test, I might assume that this answer is actually fair game. And actually really clever, because all this poor kid wants to do is save the prez from an untimely theater assassination.

Not only can we applaud this kid's wit, but also their taste in music. How can we not reserve some sort of respect for a Beyoncé-loving kid?

Raise your hand if you wish you'd thought of something this clever when you were learning about all of those angles and equilaterals in middle school. That's right, you sure do, and I can't blame you. This kid's cleverness makes me almost jealous as a grown adult.

In all fairness, yes, this kid is likely a jobless, freeloading, snack-eating, TV-watching member of his family. But then again, he or she is also just a kid who is totally entitled to be all of those things for as long as he can so the haters can sit down.

This is another instance where you're just like, "Kudos, kid, on being cool and referencing things totally out of your age range!" I don't know how they know about that '90s song, since it's likely not even the decade they were born in, but like I said, well done on that choice reference.

More Like This
From Captions To Gifts, These Are All The Kindergarten Graduation Ideas You Need
34 Instagram Captions Perfect For Preschool Graduation Photos
A Kind Friend Showed Me That Nurturing Isn't Only For Mothers
Kelly Ripa Loves A Sunday Dinner Date With Her Grown-Up Kids