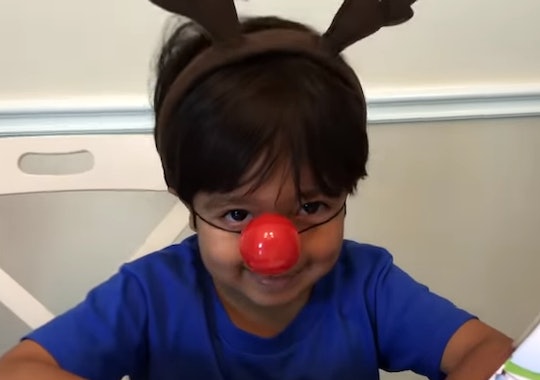 I'm having one of those days where the full weight of lost opportunity is sitting squarely on my shoulders. I'm in the dark, remembering all the ways I could have made my life better. And it's all because of a little boy playing with LEGOs. Ever since I read about this 6-year-old YouTube star making millions playing with toys, I've been pondering the meaning of my own life. And wishing I had thought of filming any one of my four sons as they played with their millions of toys.

Ryan ToysReview, according to a recent article by Forbes, is the eighth highest-paid YouTube channel on the internet right now. The 6-year-old star of Ryan ToysReview is Ryan, whose last name and location are kept secret to protect his privacy. Ryan does exactly what you think he does on his channel watched by billions of people around the world: he opens up toys and plays with them. Then he gives his review of the toy. In other words, Ryan has every kid's dream job. And probably every adult's dream job too. Besides the fact that he gets to play with toys for a living, he also makes a jaw-dropping amount of money doing it. According to Forbes, Ryan ToysReview pulled in $11 million between June 2016 and June 2017 before taxes and expenses. Take a moment. Think about your tax statement from last year. I know... it hurts.

Ryan ToysReview was created by his parents back in 2015 when he was just 3 years old. In the beginning, Ryan didn't have a massive following and wasn't even really reviewing toys, according to The Verge. About four months after his first video, everything changed with a 15-minute video where Ryan chose a LEGO Duplo train set. His views started to go up every month until they got so hight that his mother (who has not been named in an effort to protect Ryan's identity) quit her job to run the family's YouTube channel full time.

To date, the video of Ryan playing with his LEGO train has more than 40 million views.

According to Josh Cohen, the founder of TubeFilter and an industry analyst, Ryan is making history. Cohen told The Verge:

He is definitely the youngest YouTube star we’ve ever seen. It’s the biggest of this genre of programming that is getting billions of views a week on YouTube. Really nobody is talking about it, but it’s crazy once you start scratching the surface.

Of course, Ryan ToysReview is not the first YouTube channel to review toys. A full 20 of the top 100 most popular YouTube sites are dedicated to children playing with toys, according to a report by The Guardian. And Ryan's mom told TubeFilter her son was a big fan of a few of those channels before he wanted to be filmed reviewing toys himself:

Ryan was watching a lot of toy review channels — some of his favorites are EvanTubeHD and Hulyan Maya — because they used to make a lot of videos about Thomas The Tank Engine, and Ryan was super into Thomas. One day, he asked me, ‘How come I’m not on YouTube when all the other kids are?’ So we just decided — yeah, we can do that. Then, we took him to the store to get his very first toy — I think it was a Lego train set — and it all started from there.

Ryan ToysReview has branched out to include food reviews, science experiments, DIY projects, and animated shorts. And his viewers seem to be lapping it up; TubeFilter ranked Ryan ToysReview the most viewed channel in the United States for 40 weeks in a row this year.

It's enough to have me rethinking my career path. And that of my children.