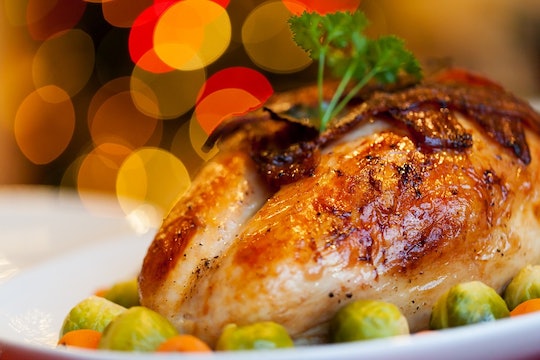 This 7-Year-Old Girl Raised $1,500 For Food For The Homeless, & It's Exactly What Thanksgiving Is About

There's this thing about kids; they seem to have a sort of natural empathy. Despite the fact that many of them live in a bit of a bubble, sheltered, nurtured, loved, so many kids seem to see the world with the freshest of eyes. And the most open of hearts. They see the things we forget to see, jaded as we are by the world at large. And, in some cases, they put real effort into making a difference. Such is the case of this 7-year-old girl who raised $1,500 to feed the homeless on Thanksgiving. Because she couldn't stand the thought of anyone having to go without a feast for the holidays.

Alex Fischer of Charlotte, North Carolina heard about the Charlotte Rescue Mission in October. The mission puts together Thanksgiving boxes every year to hand out to people who might not be able to provide the same sort of mean ffor themselves. Alex was moved by the work of the mission, so much so that she approached her parents and said she wanted to help. As the second-grader told WCNC:

I just thought it would be nice to do Thanksgiving food boxes for people in need. I want other people to have a happy Thanksgiving.

Alex'' parents, James and Lisa Fischer, naturally approved of the thoughtful idea and suggested that the family put a box together themselves. But it wasn't enough for Alex, as her mom told WCNC:

We said, 'OK why don't we pack a box together as a family? And she said, ‘well one is not enough.’ So we said, ‘why don't you try to raise her some of the money to help pay for them?’

To that end, Alex got to work. The family set a realistic goal to raise $150 for 10 boxes, and Alex raised money by going door-to-door asking for donations, having a lemonade stand, and talking to her classmates at school. Her dad admitted that he assumed the family would be "chipping in most of the money at the end" but he couldn't have been more wrong. Once Lisa Fischer started a GoFundMe page to support Alex' goal, the family was able to far surpass their goal.

Fischer helpfully outlined what would be needed for each Thanksgiving box:

She also explained how these donations would help on the GoFundMe page:

Your donation is twofold; you'll be helping a family enjoy a homemade Thanksgiving meal together and also helping Alex learn the joy of helping others in her community.

The people who donated were moved by the sincere kindness of such a young girl.

Jessica Peck Williams wrote: You have such a big heart, Alex! What you are doing is so awesome!

Ali Tehranchi wrote: Alex keep up the good work.. very nice of you to think of others this holiday season.

The Fischer family managed to raise a whopping $1,500, 10 times what they had expected. Enough to feed 100 families, an amazing accomplishment. Any leftover money Alex had is being given to the Charlotte Rescue Mission to help purchase turkeys.

As for Alex, she is justifiably proud of a job that was extremely well done. She told People:

It was very successful. I am thankful that other people can have Thanksgiving now.

This is the thing about kids; for them, it must seem so simple. People need food, so you help make sure they are fed. Period.

If only grown-ups could see things as purely as Alex, the world would be a better place.