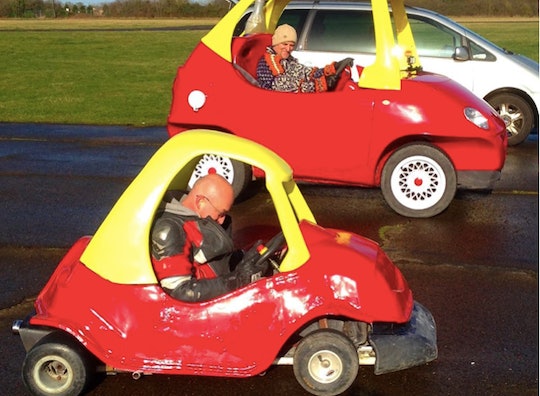 I don't know if you've heard, but nostalgia is kind of a thing — especially for kids who grew up in the 90s. Everyone wants to recapture some of the magic of their own childhood and all of the elements of it that brought them joy. And what on Earth brought 90s kids more joy than that first ride around the backyard in their good old red and yellow kid coupe? You remember the one, where you drove it with your feet and felt like the coolest kid on the block. Well now there's an adult-sized Cozy Coupe that actually drives, quite fast, and it's obviously a dream come true for every millennial parent.

John Bitmead runs Attitude Autos in the small village of Ambrosden outside of Oxford, England. His company works on specialty and bespoke cars, restoring vintage vehicles for customers who are looking for a little something extra specific. And when a colleague of his recently came to him with the idea of basically souping up his own kid's Little Tikes Cozy Coupe by putting in a motor (rather than relying on foot power as every other kid with a Cozy Coupe has to do), he had a pretty cool idea. Why not see if he could build an adult-version of the classic plastic red-and-yellow car himself? One that would actually be road-worthy and everything?

Bitmead tells Romper he didn't necessarily remember the car at first, but after his colleague described it to him inspiration struck. "Almost immediately I got a visual of a big road going one. We chatted for a while about it and then when I went home I did some drawings based on my idea," he says. "I knew exactly what car had the right look so that was the easy part, my drawings confirmed that it could work and so the following morning I went in armed with the drawings and said we needed to make it."

From there Bitmead and his brother, Geoff Bitmead, got to work on cutting down a car that would work for his project, specifically a Daewoo Matiz.

"Cutting the car down for a start had to be precise for it to work correctly, seating position, gear lever and handbrake position along with dashboard controls," Bitmead tells Romper. "Then keeping the feel of the toy element was important so lights, mirrors, one door with no handles and the fuel filler along with the separate tall windowless roof all had their own little issues."

Once the issues were all smoothed out, Bitmead found himself with a road-worthy replica of the Cozy Coupe, one that can actually reach speeds of 70 miles per hour. Sure, the original cost about $50 and this one cost around $5,000 to build, but still — it's pretty creative! And it was also a feat so impressive it actually earned recognition from the Guinness Book of World Records as the Largest Cozy Coupe in the world, which left Bitmead a little stunned.

"Receiving the world record for the car was an incredible rush that is hard to put into words," he says. "To go from being just a piece of fun that causes a stir to actually holding a global record title was utterly astounding."

Of course, perhaps the best part about creating an actual Cozy Coupe an adult can drive is the reaction it gets from people on the street. Because who doesn't want to put a smile on someone's face, right? Bitmead tells Romper that the Cozy Coupe never fails to get a positive reaction from fellow drivers. "Every time the vehicle went out you’d get people waving, smiling and even cheering," he shares. "It was great going out at rush hour as you could visually experience people faces going from glum and miserable to a beaming grin."