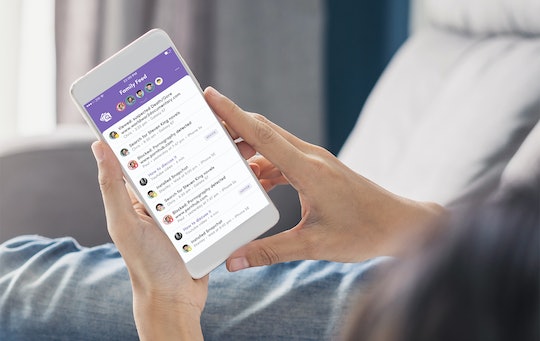 Your kids are going to spend more time on their devices than you thought they would. This, my friends, is pretty much a guarantee. The world is very different now, and complaining about that fact isn't going to change anything. Waxing poetic about the good old days when kids played outside or blah, blah, blah... who does that help? No one. Certainly not parents who need actual solutions to help their kids navigate the world. You know what could help do the trick? This app created by dads aimed to help parents monitor their kids' time online and the sort of sites they could be looking at.

Mike Burns, David Savage, and Chris Rothey are all fathers. Each of them has four kids, and Burns tells Romper in a recent interview that they all found they were having issues with their kids and their devices. They weren't sure what their kids were doing online, and couldn't seem to get a read on how much time they were spending on their devices. So Burns looked into third party monitoring solutions, but admitted he found them expensive and difficult to navigate. Parental controls had to be applied to every device, and this didn't feel like something that was manageable for a busy working parent.

And so, this electrical engineer and his two business partners decided to find a better solution. Enter the Zift app, an easy to use, accurate, free way for parents to monitor how much time their kids are spending online.

The Zift app employs a "Family feed" to accurately track the time your kids are spending online and, just as importantly, how they're spending their time. As explained on iTunes, you’ll be able to see:

Accuracy is actually a huge factor for the Zift app, especially because all three of the dads who founded the app did research and found that some third party monitors were simply judging "a book by its cover."

Zift employs the Net Nanny Smart Filter, which doesn't block all sites but looks at individual web page content to figure out in real time if your kids are in danger.

For parents who are worried about limiting their child's screen time, don't be. A recent study shared by Science Direct found that higher screen usage was linked to anxiety, depression, less curiosity in children, and a drop in a general feeling of well-being.

Besides, staying connected to these aspects of your kid's life might well bring you closer together. For instance, Burns shared a story with Romper about his own 12-year-old daughter who had downloaded an app on her device called "House Party" that was brought to his attention with his Zift app:

I checked reviews on Zift, it was a video chat app. She could be speaking to a stranger and other people might be able to take a screenshot of her without her knowledge. I blocked the app. I was able to go into her history to see that she was just trying to research how to chat with her friends. It ended up being a great moment for us; we were able to have a conversation where I could tell her I was proud of her for doing her research. It was a nice moment.

The Zift app was created by dads who were looking for ways to protect their kids in a manageable way, but also to stay connected with them. Because things might have changed in 2018, but one thing remains constant: all we want in this world as parents is to know our kids are safe.

Download the Zift app for free to find all the ways you can make that happen.