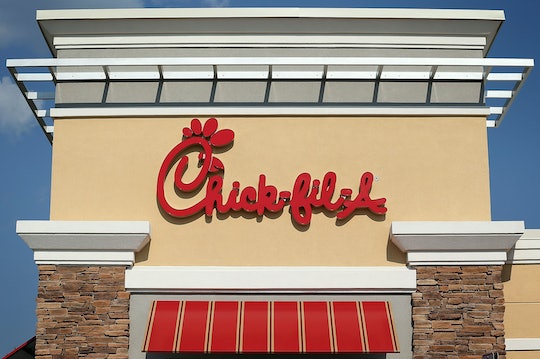 Whoa, This Baby Born Inside A Chick-Fil-A Gets Unlimited Food For Life

For many women, Chick-fil-A is a go-to spot for fulfilling their pregnancy cravings, but one Texas mom recently got way more than she bargained for when she unexpectedly gave birth after stopping into one to use the bathroom. Her story is seriously intense, but thankfully she and her little girl are both doing well. And there is at least one pretty cool consolation: this baby born inside a Chick-fil-A bathroom will now get free food for life.

The story began Tuesday night, as Falon and Robert Griffin were dropping their two daughters off with a family friend on their way to the hospital where Falon was expecting to deliver her third child. They'd stopped to meet their friend in the parking lot of a San Antonio Chick-fil-A location, and although the restaurant had actually closed for the night, Falon told local news station KSAT 12 that she had an overwhelming urge to use the restroom, so she banged on the door and asked the staff if they would let her in. They did, but things quickly took a turn: Falon said she realized once she made it to the bathroom that her baby girl was actually ready to come out.

The store's manager quickly dialled 911, but Robert told the outlet he knew they'd have to somehow manage to deliver the baby themselves in the bathroom. Naturally, Falon was terrified: she told KSAT 12 she was "in excruciating pain," and she "[didn't] know if [her daughter was] going to come out alive." Making matters worse? As the baby was being delivered, Robert realized that the umbilical cord had actually become wrapped around the baby's neck twice — a complication which could have been life-threatening. He managed to get the cord free, and little Gracelyn was born at 10:30 p.m. that evening, about ten minutes before the ambulance arrived to rush them to the hospital.

The Griffins' story is the kind that's hard to even imagine, and Falon said that after her daughter had been born, she couldn't quite believe what had just occurred. But if you're currently pregnant, or if you might become pregnant at some point in the future, it will probably be reassuring to hear that giving birth en route to the hospital — in a Chick-fil-A bathroom, or anywhere else — isn't actually very common.

In 2014, approximately 59,000 American babies were born outside of hospitals, according to the Centers for Disease Control (CDC), representing about 1.5 percent of deliveries. But most out-of-hospital births are home births or births at freestanding birthing centers, which means the actual number of "whoa, I'm having a baby on a toilet!" deliveries is thankfully super small.

Yet, as the Griffins prove, it's still totally possible to get caught off-guard by your baby's arrival, and given that, for some women, childbirth can actually take less than three hours from start to finish (known as precipitous labor), the reality is that every now and then, it's going to happen. And, of course, in rare cases, women can actually give birth without even realizing they were pregnant to begin with, which, let's be honest, is probably the only thing that would be more shocking than giving birth in a Chick-fil-A bathroom on the way to the hospital.

As much as their daughter's delivery was likely far from what they were envisioning, being entitled to free food at Chick-fil-A will at least be a pretty fun way to commemorate her unique birth story for many years to come. But complimentary chicken sandwiches aren't actually the only cool perk in little Gracelynn's future: not only have the owners of the San Antonio franchise already offered to help plan the baby girl's first birthday in 2019, according to KSAT 12, they've also promised her a guaranteed job when she turns 14. So while it might take her parents a while to get over their shock, something tells me Gracelynn probably won't be too bothered by her headline-grabbing birth story in the years to come.