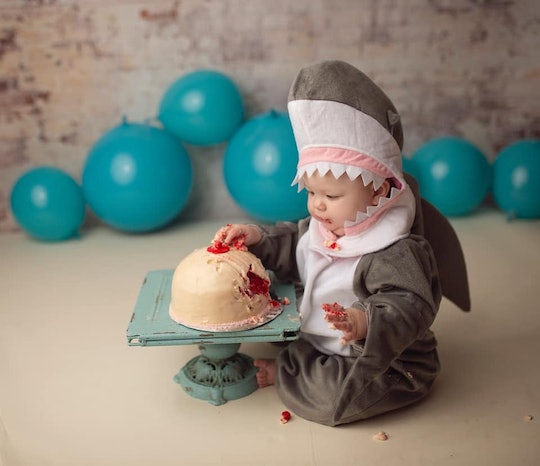 Ah, breastfeeding. The closeness and the bond that often develop from nourishing a baby from the breast is something to be cherished. But after a few months, something happens that can make the experience decidedly less serene: Teething. Once that first pearly white breaks through, moms are at risk of their little ones chomping down during a feeding. (Ouch!) As much as many women enjoy breastfeeding, those times when their babies decide to bite the boob that feeds them is basically the worst. Which is why this baby shark cake smash is equal parts sweet and scary for breastfeeding moms.

Kayla Seitz recently set up a special photoshoot for her 9-month-old daughter, Sophie, in celebration of making it nine months into their breastfeeding journey, according to Fatherly. And the metaphor of a baby shark chowing down on a giant breast is too perfect, if you ask me. Because that's exactly what she did. Her "Sophie Shark" (do-do-do-do-do-do) can be seen savagely digging into a boob-shaped cake — complete with red icing inside — while sporting a shark costume. "Here's to surviving nine months of breastfeeding," Seitz told PopSugar. "Since Sophie has started teething, my family has called her Sophie Shark because she is harsh with the... ninny. I had to do some cute photos to remind me how painful [it is] and to not have any more kids!"

These magically hilarious photos were captured by Iga Logan Photography. And although fellow nursing moms are probably laughing at this whimsical cake smash — I'm sure many of them are also shielding their breasts and flashing back to those awful biting moments of their own.

I've nursed three teething babies so far (plus my newborn,) so I know exactly how this poor mama feels. The first time my oldest decided to bite my boob, I let out a yelp of shock and jerked him away from the breast. I think my reaction scared him and was enough to send the message: Absolutely not. Thankfully, the whole biting nonsense was never a persistent probably for me. *Fingers crossed for baby number four*

If your nursling is teething — or getting close it — the good news is there are some measures you can take to (hopefully) discourage biting. "You might be able to prevent biting altogether by massaging his gums with your finger before a feeding," Jan Barger, a lactation consultant, wrote for BabyCenter. "If he continues chomping, take him off your breast and tell him firmly 'no biting!' Since babies often start biting when they're full, it may be a sign that he's finished eating." She continued:

But if you don't think he is quite finished, wait at least 15 minutes or so before resuming nursing. Eventually he'll get the message.

This is going to sound a bit dramatic, but having my baby — whom I carried inside my body for more than nine months and then nourished with my body for months afterward — nonchalantly bite down on my nipple felt like a betrayal of sorts. Like, "What the heck, kid?! With everything I've done for you, this is how you repay me?" My advice: Don't take it too personally.

Oh, and definitely do a baby shark cake smash photoshoot.

More Like This
Can You Burp A Baby Too Hard? A Pediatrician Shares Tips For Gassy Tummies
Here Are Parents' Top Trending Searches In 2022, Because Google Really Is Our BFF
Over 10,000 Sippy Cups & Bottles For Toddlers Recalled Due To Lead Poisoning Hazard
We Have To Talk About This Fish That Will Pat Your Baby's Butt Until They Fall Asleep