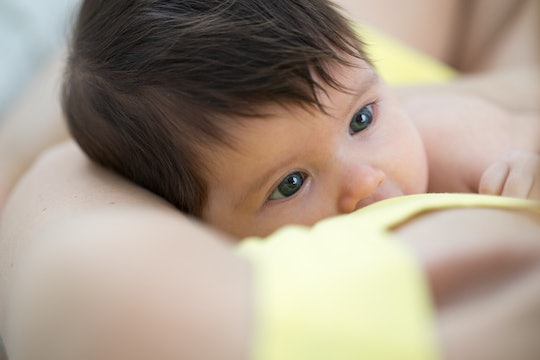 It's never a good idea to bite the hand that feeds you... but babies have a lot of other things to learn before they start deciphering popular sayings like that one. Which means that you're the one who suffers if your baby bites hard on your nipple while breastfeeding. So what does a bite mean? Is your baby upset? Is there something wrong with the milk? Is she ready to wean?

While a hard chomp on your tender flesh may not be an enjoyable experience, it is a way for your baby to communicate something to you. "One thing is for certain: A baby that's actively breastfeeding can't bite at the same time, since the tongue covers the lower teeth, and the nipple is hitting the softer palate at the back of the mouth," says Adriana Lozada, advanced birth doula, postpartum educator, and host of the Birthful podcast. "If you feel teeth, then that's a reaction to something else."

But before you start diagnosing the problem, remember that this isn't something to get stressed about. "It can be quite common for babies with teeth or even younger babies before teeth have sprouted, to bite down on mom’s nipple while nursing," says Betsy Marks, M.D., a pediatrician and internist in Albany, New York. If you're in pain and need to get the baby to stop, Marks warns against pulling the baby off your breast, which can damage the nipple. "Instead, try to break the bite by putting your finger between their gums to open their mouth."

So you've freed yourself from the iron grasp of your baby's gums. Now how do you figure out what caused him to bite in the first place so you can make sure it doesn't happen again?

"A baby biting your nipples can mean a lot of things depending on the baby’s age," says Megan Davidson, Ph.D., doula and chest/breastfeeding counselor. One thing it does not mean is that your baby is ready to wean. But, says Davidson, "it could be that the baby has a tongue-tie and is having a hard time getting their tongue to cover their bottom gum." A tongue-tie, according to the Mayo Clinic, is when the tongue is tethered to the floor of the mouth by an unusually short or thick piece of connecting tissue. It doesn't always cause problems, but if it's interfering with breastfeeding, a simple surgical procedure can correct it.

There are other physical reasons the baby might bite, too: "It may [be] because they don't quite have the hang of an effective latch-suck-swallow process, or something structural is getting in the way," such as torticollis, says Lozada. Despite the odd name, torticollis is a relatively common condition, as explained by Bundoo. It usually means that one of your baby's neck muscles was damaged in utero. To make nursing easier, try placing your baby in a "football" position.

If it's the latch-suck-swallow process that's getting in the way, What To Expect explained how to adjust your baby's positioning: "You'll know you've got a proper latch if your baby's chin and tip of her nose are touching your breast." But if the problem is that your baby goes from correctly latching to biting, then "if you can anticipate the subtle change when unlatching before biting, you can try to prevent it!" notes Kristin Gourley, IBCLC Manager, Lactation Link LLC.

Another cause of biting could be the flow of milk. "Sometimes biting is to quickly stop the flow of milk while sometimes the bite is an attempt the trigger a new milk ejection reflex," says Danielle Downs Spradlin, IBCLC, Oasis Lactation Services. In other words, the baby might be getting more milk than she can handle, or not as much milk as she wants.

If oversupply is the problem, La Leche League G.B. has several recommendations, including trying to nurse more frequently, finishing the first breast before moving to the second, and adjusting your baby's positioning and attachment. And if you need to increase milk flow, try using breast compression, or see what happens if you breastfeed as often as your baby is willing, rather than at set intervals.

Another, more obvious reason for a baby biting hard while breastfeeding might be that she's teething. "Babies who are actively teething can have discomfort and can often want to bite down or chew on something to help with the discomfort of teething, so biting may feel good on their gums," says Marks. Or, it could be that you're nursing when he doesn't really want it. "A baby that's teething gets comfort from biting, so if you happen to misread the cues of discomfort as wanting to nurse and offer the breast... you may get bit," says Lozada.

Biting might also come from distraction — either yours or the baby's, says Marks. If it senses you're preoccupied, your baby may bite to try to get your attention. "It may also happen if the baby itself is distracted, turning its head with the nipple in his or her mouth, or starting to fall asleep while feeding," adds Marks.

If your efforts to curb the biting aren't having the desired effect, try and see what happens if you just don't react. "Most babies will stop biting if the behavior is ignored," says Downs Spradlin. "Others may need to be put down and left to play alone for a minute or two to get oral stimulation from a toy."

In any case, "it is important to try not to react too strongly, such as yelping," notes Gourley. "This can scare baby away from breastfeeding in the future."