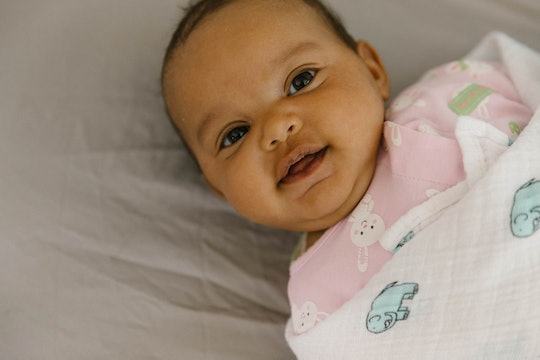 Will A Tongue Tie Release Itself? Here's What You Need To Know

As a new parent, you quickly learn that there are many things you don't consider in terms of the health and growth of your child until you are faced with that issue. When my daughter was diagnosed with eczema, I wanted to know everything there was about soothing it. When my friend discovered her son had peanut allergies, she armed herself with an EpiPen and researched every safe recipe she could find. We learned as we went, as did an acquaintance who found out her daughter was tongue tied. At first, she wondered, "Will a tongue tie release itself?" But she soon learned it wasn't the solution for her child.

"Tongue tie is a common problem in infancy," Dr. Emily Edwards, a pediatrician at MemorialCare Saddleback Medical Center, Laguna Hills, California, tells Romper. "Most of the time, it will not spontaneously resolve."

According to Baby Center, about 4 percent of babies are born with a tongue tie and it tends to run in families. The website noted that many cases of tongue tie do correct themselves during a baby's first six weeks as a result of structural mouth changes. While many incidences of tongue tie are asymptomatic, Edwards says the reduced range of motion can cause issues with feeding, swallowing, and speech articulation.

"Older children with this condition may have difficulty licking their lips or playing a musical instrument," Edwards says. "It is important to talk to your pediatrician about treatment options when your infant is young."

Interventions for tongue tie often involve surgery followed by speech therapy. Surgical methods include snipping an infant's frenulum (the small fold of tissue under the tongue), a revision of the frenulum by means of surgery or laser, or electrocautery (a laser with heat) using a local anesthetic, according to TongueTie.net. "In tongue-tied infants, the frenulum is usually attached close to the tongue tip, leaving little or no 'free tongue,' but it can also be placed further back and be unusually short or tight," La Leche League International (LLLI) noted.

So how might you spot tongue tie? Common symptoms and signs include poor latch, a clicking sound when nursing, gassiness, reflux or colic, and poor weight gain, according to Mommypotamus. On your side, you may notice low milk supply, plugged ducts and/or mastitis, and general discomfort while nursing, the website noted.

Of course, the reason for a poor latch isn't always tongue tie. Other reasons your baby might be experiencing issues include: your baby was premature, you have inverted or flat nipples, or you have poor positioning during feeding time. According to LLLI, a semi-reclined position might help your baby find a deeper latch, while breastfeeding expert Corky Harvey recommended in a Fit Pregnancy video that a mom try the laid back technique or football hold. Harvey noted that the football hold is especially beneficial to moms who have had C-sections.

If you suspect colic might be the issue, then you may notice your baby begins crying at the same time each day, crying sessions last for three hours, and/or they tense their muscles when they cry. According to Parenting, 15 to 25 percent of newborns experience colic, but most pediatricians aren't exactly sure what causes it. Gas, reflux, overfeeding, bacterial imbalance, and a protein allergy have all been linked to the condition.

The subject of tongue tie is another one that points back at one very specific truth — you know your child best. Whether you suspect tongue tie or colic may be the reason your baby cannot latch properly or seems fussy, you are the one who knows when it's time to seek help from outside resources. It can be tough to shut out the noise of well-meaning friends and endless Google searches, but that, mom, is yet another skill that comes with parenting.

More Like This
There’s A Reason Your Baby Always Falls Asleep While Breastfeeding
Can You Breastfeed After A Breast Lift? Experts Explain
The Difference Between The PICU & The NICU
Parent's Guide To A Baby's Dry Cough: Why They Happen & How To Treat