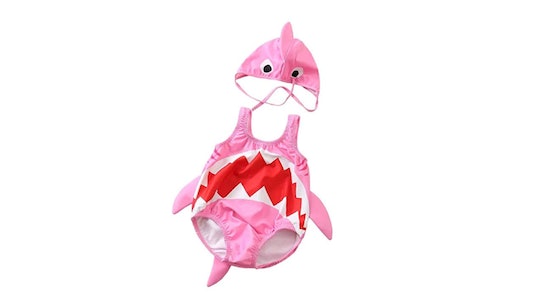 Summer might be almost over, but I've got a feeling you're going to want to pick up a new bathing suit for your baby or toddler before fall arrives. There's an absolutely incredible Baby Shark swimsuit for sale on Amazon, and the cuteness level is through the roof.

If your kiddo can't get enough of the infamous "Baby Shark" song by Pinkfong, they'll love getting dressed up just like the main character. The suit comes complete with scary shark teeth on the belly, fins on either side, a tail, and the perfect finishing touch — a swim cap with eyes and another fin. The suit comes in three different colors: gray, pink, and blue. It's available in sizes 6 to 12 months, 12 to 24 months, and 24 to 36 months. It'll cost you $18 to invest in the cuteness.

Fair warning, however, that the suit doesn't appear to have any crotch snaps, so diaper changes could be kind of a hassle. Still though, it could absolutely be worth wrestling your little one in and out of it just to score the perfect Instagram-worthy shot (plus, there's plenty of elastic around the leg holes that should hopefully make changes a little easier). There aren't many reviews on Amazon for the suit, but seriously, do you even need to know any more about it after seeing the adorable pictures?

The other thing you'll need to be warned about before you consider buying this suit is the possibility of getting the "Baby Shark" song stuck in your head — possibly forever — because there's no way you'll be able to resist firing it up on YouTube and having your little one dance along in the perfect outfit. The company behind the viral hit isn't associated with this bathing suit, but it does have its own line of merchandise, of course.

If you're balking at the idea of buying a new suit with so little swim time left in the summer, I've got a fun suggestion for you: if there's a little extra room in the suit, why not throw it on over pants and a top and use it as a Halloween costume? It's definitely got some re-wearing potential, if only for the fact that it's sure to put a smile on your face every single time you see your baby or toddler wearing it. And Halloween costumes tend to be way more expensive than bathing suits anyway, in my experience.

My little boy actually was a baby shark for Halloween last year, so I can attest to the fact that dressing a kiddo up like one is a surefire way to melt hearts. He rocked a hooded sweatshirt similar to this one, but had I known a bathing suit was available, I definitely would have been tempted to splurge on one. If you're really on board with the baby shark costume idea, too, you can fully commit by having the whole family dress up as a school of sharks — officially licensed "Baby Shark" costumes have been on the market for a while now. Whether you're going full out with family costumes or snagging a single shark swimsuit, just be sure to have your camera ready for the adorable pictures.

More Like This
The 16 Best Subscription Boxes For Every Kind Of Kid
20 Stocking Stuffers For Kids Under $20
The Best Toys For 3-Month-Olds
101 Advent Calendar Activities, From Books To Read To Cookies To Bake