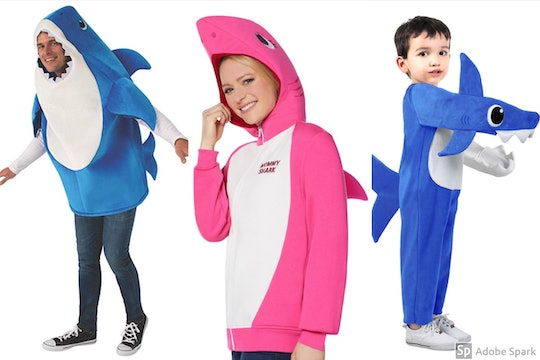 The viral kids song "Baby Shark" seems to be the bop that just will not go away. While some find it annoying to listen to the same toddler tune time and time again, those who want to embrace their inner shark can doo-doo-doo-do-do just that because there's a way to dress the whole family up as the Baby Shark family for Halloween. Yes, it may only be July, but if your family is ready to get a jump on planning your fall festivities, you can start shopping online right now.

The official YouTube video has been viewed more than 3 billion times to date (Yes, billion.), and the song's tremendous staying power will probably have us all singing "Baby Shark" through the next millennium. The catchy tune, created by South Korean firm Pink Fong, has been turned into a national-touring live stage show, is helping dads bond with their kids, is being developed into a Nickelodeon television show, and has now inspired Halloween costumes for the entire family.

Because dressing up like different types of animals is a quintessential Halloween activity for children, finding a cute shark costume for your kiddo has never been exactly hard. But the popularity of the "Baby Shark" song in recent years has given way to a variety of increasingly creative costumes for kids and adults alike.

Take for instance this freakishly adorable shark costume from Party City. Not only can your child dress up like a shark, but they can do the signature "Baby Shark" hand motions with an actual shark on their hands. While it may not be super convenient for grabbing handfuls of candy while trick-or-treating, your kids will probably be too distracted by doing the "Baby Shark" dance all around the neighborhood to notice.

This particular costume comes in three colors, so your little shark can choose to be a blue, pink, or yellow Baby Shark. I personally love that it doesn't have a shark face over the top of the head like some traditional shark costumes since some kids are a little weirded out by wearing masks or having shark teeth covering the top of their head.

And if you thought dressing up like a Baby Shark character was just for kids, think again. Moms can sport this fetching Mommy Shark hoodie sold by Halloween supplier Spirit. Because you're not a regular mom, you're a cool mom... in a Mommy Shark costume hoodie.

Daddy Sharks everywhere can also get in on the under-the-sea action this Halloween by ordering a costume for themselves from retailer Rubie's Costume Company on Amazon. This particular costume might even be just a tad bit cooler than the Mommy Shark hoodie because it legit plays a sound clip of "Baby Shark." Don't worry though, there's an on/off switch so that your kids won't drive Daddy bonkers before the night is over.

Just don't forget to blast that addicting song from your phone while you and your entire family dance and sing along in your authentic Baby Shark getups on Oct. 31. You'll be the envy of all of the neighbors who just wish their family was as cool as yours.