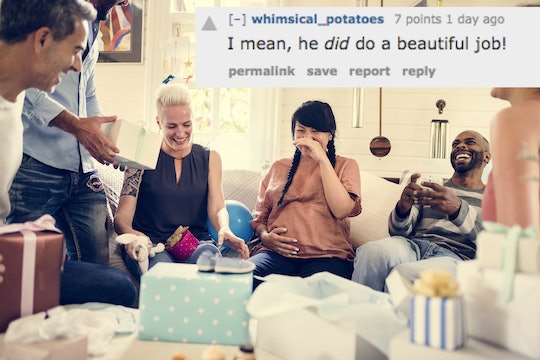 Baby showers are known for being... well. Kind of boring. There's always punch (either pink or blue, unless you're going to be surprised and then it's just like, Sprite and sherbet), tiny croissants filled with chicken salad, and some stack of games literally no one wants to play. (If any second cousin-in-law I've never met before tries to measure my belly with toilet paper, I'll scream.) But sometimes, you get lucky and your husband creates the ultimate baby shower piñata for the baby shower you're hosting.

OK, stick with me. A piñata at a baby shower sounds kind of bizarre. What do you fill it with? Packs of hemmorhoid cream and witch hazel wipes? Maybe some pacifiers and diapers? Imagine a pack of bottles and a breast pump landing on your head. But the really tricky part is trying to figure out the piñata shape. Do you want a baby? It seems really weird to beat a baby-shaped piñata with a bat to release some kind of confetti. A baby carriage? Also terrible. A giant pink or blue baby foot-shaped piñata? Guys, these are all terrible.

No, what you need is a husband who's willing to make the baby shower as realistic as possible. You need a vagina birthing a baby as your piñata.

I mean, would you look at this? Reddit user morrisonismydog tells Romper that her husband made this terrifying, awesome piñata for a baby shower she was hosting after spotting a muffin-shaped piñata at the 99 cents store. (A muffin-shaped piñata. That he turned into a vagina. This story is so good, y'all.) He then did a little creative work to make the muffin less muffin and more... well. You know. And of course, muffins don't usually come with a clitoris and labia (how could you not notice these here), so all we can gather here is that morrisonismydog's husband knows more about female anatomy than most of Congress.

She does tell Romper that her husband did some anatomical research, but that's because he wasn't entirely sure how the baby was supposed to come out. I mean head first (it's sunny side up, but hey, that happens) and right down there at the vaginal canal? He nailed it. (You guys, the puns are just writing themselves here, I'm not even making this happen.)

Of course, the real thing here is now you've got to beat this piñata with a bat or stick in order to win whatever's inside. Is it just a baby? Perhaps. But I think my idea of some medicated wipes and maybe a sitz bath stuck inside would be really helpful. I mean, you already know a vagina's going to take a beating during childbirth. Might as well make it a little more fun to happen, right?

I think my favorite might be all of the shades of pink crepe paper attached to this giant vagina piñata. And while it sounds really scary to hit a vagina open, you can shout things like "episiotomy!" to make the mama-to-be you're celebrating laugh until she pees herself. (It's not difficult.) And then maybe console her when she realizes birth is going to look somewhat similar. (But not always! Piñatas don't get drugs, my friend.)

Truth be told, this vagina piñata is no scarier than the giant vagina cakes people have at baby showers. (NO THANK YOU. How do you cut into it and... eat it?) So go forth, creative people. Take notes and create the ultimate vagina piñata for your loved one. It is, quite literally, the least you can do.